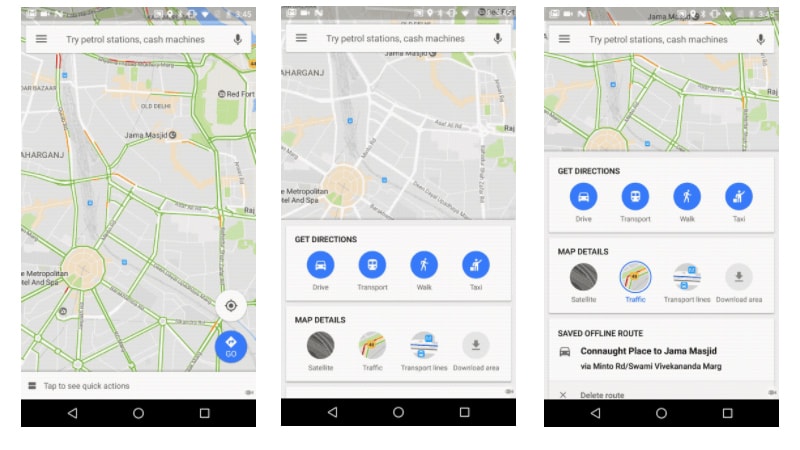 Google update will bring new features to the home screen, specifically designed for users in India. The home screen now has a new Quick Actions menu for shortcuts that allows you to see directions, saved offline routes, and map details all in one tap. Google also claims that the home screen loads much faster for users to make the most of it even in spotty connections - something that's in abundance in a country like India.

The update is rolling out only for Android users in India, and you can head to Google Play to see if you've received an update or not. Once you update to the latest version, you should be able to see the Quick Action menu at the bottom of your screen, where it first showed live traffic updates. Tapping on the Quick Actions menu, you get greeted with three sections - Get Directions, Map Details, and Saved Offline Route. The Get Directions section lets you decide whether you want to take a car, taxi, or just walk to the cinema hall nearby. The Map Details section lets you see the map in satellite or traffic mode, and also see the public transportation available in your area, as well as the ability to download the area.

How Google Maps Can Be Improved in India

Lastly, the Save Offline Route section lets you see your last saved route offline, to use it later when you're on the go and don't have data connectivity. All of these actions were already available in Maps, but the latest update brings it one menu for ease in use.

"Now when you fire up your Google Maps app, you'll instantly see a directions card with different modes of transportation. Whether you'd like to take the bus to Connaught Place in New Delhi or you are planning to go by foot to a new mall that just opened nearby, you can start planning your route with a single tap. And if you'd like to access a certain route while you're on the go without using data, you can save the route to be used offline," Cathay Bi, Product Manager Google Maps, explains further on the blog.

If you haven't received this update, don't fret, you'll get it over the course of the week, and be sure to keep checking Google Play for it. This update, specifically for Indian users, speaks volumes of Google's commitment to the country. Recently, Google Maps even made it easy for users in Delhi-NCR and Madhya Pradesh to find public toilets nearby.