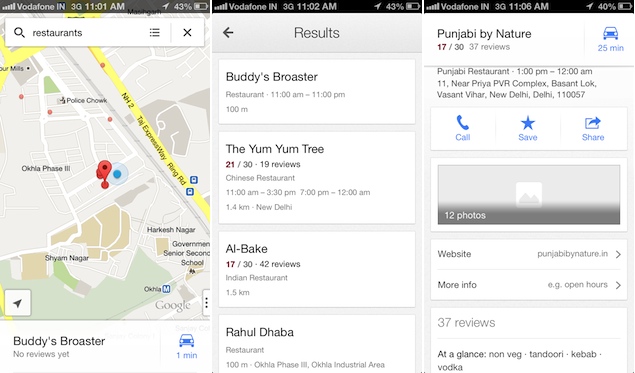 Google has updated its Google Maps app for iOS bringing integration with local search information across categories such as restaurants, coffee shops,bars and other attractions, bringing nearby listings along with contact details, reviews, and directions. While these are the only places categories available in the Indian region, the app also offers categories like gas stations, post offices, hotels, grocery stores, pharmacies and movie theatres, in other regions.

Users can choose to view the listings on one single page or by swiping across the screen in map view. The app also returns results for other business listings through third party providers such as Indiacom Yellow pages.

The app also brings in the ability to search for addresses of the users' Google contacts if they sign-in with their Google credentials. However, users can only choose contacts from their Google account contacts and not from their iOS contacts. Of course you'll need to save address details for your contact in order for the app to show it up.

The app also lets users choose between Kilometers and Miles for distance units. The app is still not optimised for iPads though. The update also brings maps for Bahrain, Egypt, Lebanon, Oman, Qatar, Saudi Arabia, and the United Arab Emirates to the app.

Google launched its iOS maps app in December 2013 and the app was downloaded over 10 million times in the first 48 hours of its going live on the App Store. The app brought new features including turn by turn voice directions and improved maps to iOS after Apple decided to boot out Google maps, choosing its own maps with the release of iOS 6.

It was also reported that iOS 6 adoption grew 29% in four days after Google released its Maps application. Apple maps were panned for being less detailed than Google's and at other times for being flat-out wrong.