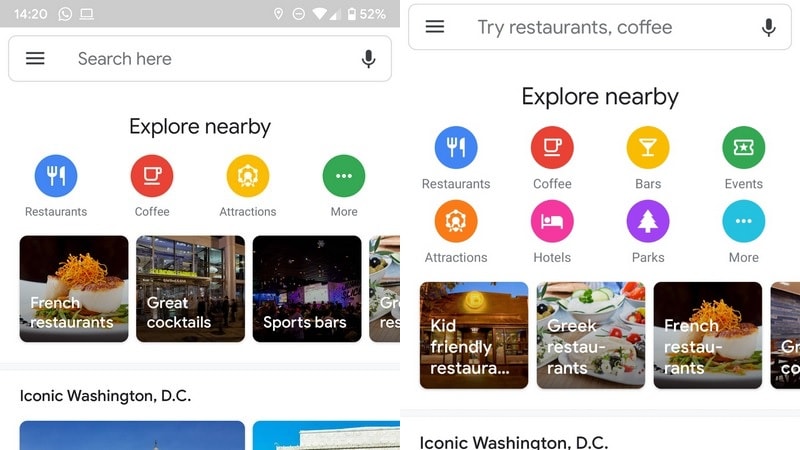 Google has been pretty busy lately in pushing more and more features to its Maps app. And now its been reported that the company is working on a new feature for Google Maps wherein a user will be able to discover surrounding places much faster. This will be made possible with the help of additional search shortcuts. It appears the plan is that with the newly added features, whenever you open Google Maps, you will be greeted to seven new shortcuts along with the more button that will help in accelerating the discovery of newer spots.

In the current version of Google Maps, you get four icons under the Explore nearby tab; Restaurants, Coffee, Attractions and More. Now according to a report by Android Police, a new UI has been spotted on Google Maps. According to the screenshots, there are now eight buttons under the Explore nearby tab as compared to the earlier four. The new additions include separate options for Hotels, Bars, Events and Park. Now you can argue that a user can always get these results by looking for them in the search bar, instead of tapping on separate buttons for the newly added categories. But then again there is nothing to lose if things get simpler.

Lastly, if you wish to get the latest version of Google Maps then you can head over to APKMirror and download the latest beta build. However, we downloaded the latest update of the app and couldn't find the new features for ourselves. Looks like the new additions to Google Maps seem to be rolling out as a server-side test, and cannot be determined through an app version.