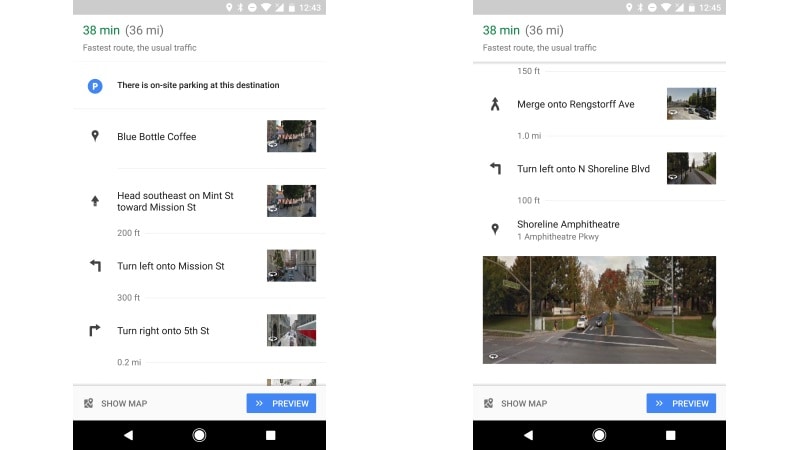 Google Maps has now received some little useful tweaks that might make your life a little easier while navigating through the roads. The search giant has now added Street View integration to the Directions screen in the app and even added a bar at the bottom of the screen that allows you to get easy access to some of the useful tools within the app.

The changes to the app were first noted by Android Police and as per the report, users will now see thumbnails from Google Street View on the Directions screen while navigating to a certain location. On tapping these thumbnails, users will get a full 360-degree view from Google Street View with location set for the next turn, as pointed out in the report. This integration will help users in making precise turns and will hopefully prevent them from taking the wrong routes.

Additionally, the company has tweaked the user interface of the app to include a bottom bar that provides easy access to directions and more information to users within the Google Maps app. This UI change replaces the floating direction button with a more recognisable option to reduce some confusion for the users, Android Police points out.

Notably, these changes are not showing up for everyone as yet (including us) and while Street View thumbnails are showing up on versions of Maps as far back as v9.51.1, the bottom bar seems to be showing up for v9.52.0 and later, as per report. The changes have not shown up for us just yet and will hopefully show up sometime soon. These changes have shown up on the Android version of the app, but make their way to the iOS version soon as well.