Google Maps has started rolling out a feature that lets users report accidents and speed traps while navigating to their destinations. The new feature, which is inspired by speed trap and accident reporting options on navigation app Waze, was initially spotted last year. However, it appears that Google has now brought the new update for its users globally. The feature pertaining to speed trap and accident reporting is available to Android devices at the present stage. It is also likely to make way to iPhones in the coming future, though.

Similar to how people can report on Waze, the new feature allows users to report speed traps and accidents on Google Maps. You need to tap the Add a report option by tapping the upward arrow from the bottom of the screen or by pressing the report button from the navigation screen. The report button sits next to the audio and magnifying glass buttons.

Once tapped the Add a report option, you can report Google directly about a crash or a speed trap you've encountered on your route. Google Maps also show how many people have reported issues on your route to help you decide whether you should continue on the same route or pick an alternate one. 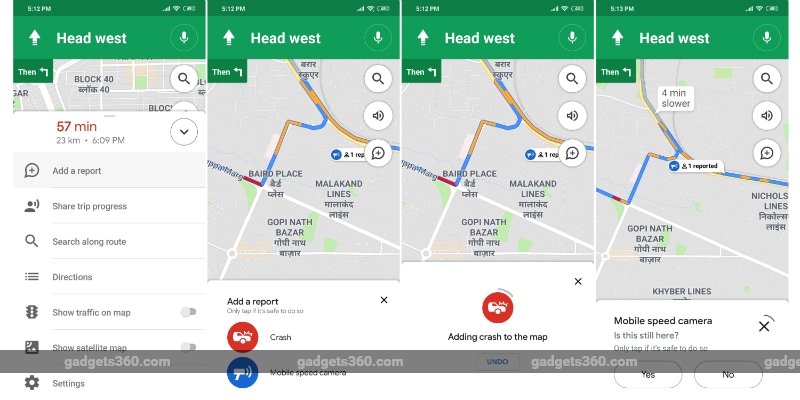 It is worth noting here that the new feature is only visible once you start the navigation on Google Maps. Also, unlike the reporting features on Waze that are available to report not just accidents or speed traps but also road closures and hazards, Google's offering is still limited in nature.

Google hasn't officially announced the new feature to report accidents and speed traps. However, Gadgets 360 was able to independently verify the rollout on Android devices in New Delhi. An email was also sent to Google for clarity on the rollout, though we didn't receive a response until the time of publication.

As we mentioned, while Google is now apparently rolling out the reporting feature globally, it was first spotted back in June last year. Some refinements were even reported in November.