Google on iOS Gets iMessage Extension, Expanded Browser Suggestions, and Drag and Drop for iPad 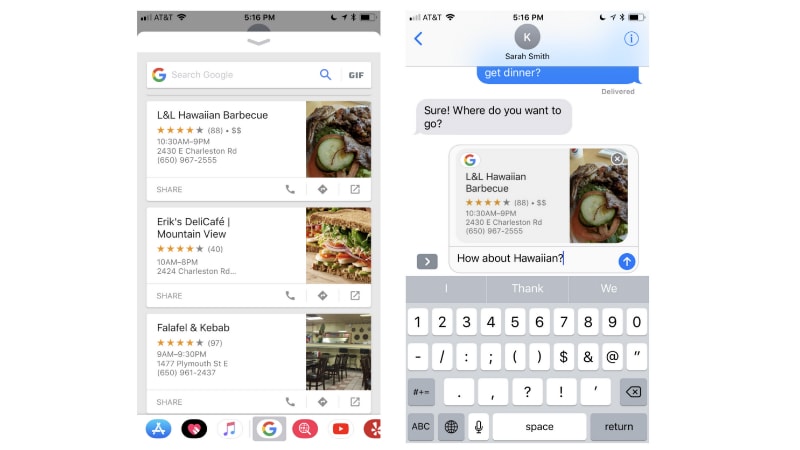 Google on Monday announced three new features for the Google app on iPhone and iPad. These include an extension for Apple's iMessage App Store, expansion of the Search Google button to most mobile browsers including Safari and Chrome, as well as enhanced drag and drop features on iPad models running iOS 11. The iMessage extension is currently only available for iOS users in the US, with other parts of the world expected to get it soon.

The native messaging app on iOS now supports a new Google extension that lets users search for GIFs, nearby locations, videos, and other useful conversation tools while you are messaging contacts with iMessage. "Want to research a new restaurant before sharing it with friends? Just tap on the restaurant card, and we'll take you to the Google Search page, where you can look up the busiest times, as well as menus and reviews. Switch to GIF Search mode, and you can find and share a 'happy birthday' GIF," said Khanh Le, Product Manager at Google Search in a blog post. The feature can be accessed by downloading the Google app and tapping the extension from the iMessage apps drawer.

After Google added the Search Google button on select browsers on iPhone and iPad to help users access Google Search results around related content last year, the tech giant is now expanding this feature to most compatible browsers including Safari. The Search Google button can be found in the Share option on the bottom taskbar of the respective browser.

Drag and Drop for iPad
And, finally, Google app on iPad is also getting a major functional upgrade. With iPad variants running iOS 11, users can drag and drop to shift text, images, hyperlinks to and from the Google app. "If you're reading a great article on the Google app, tap and hold to pick up the link and drag it into iMessage to share with a friend, or into Notes to save for later," said the blog post.