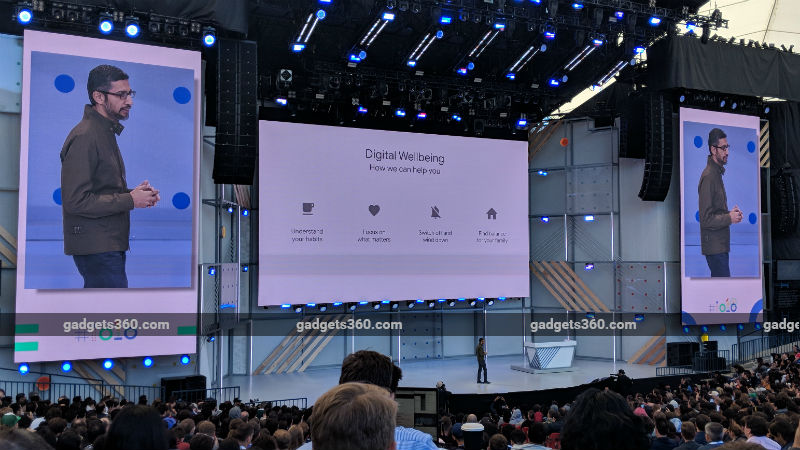 Google, at its annual developers conference - I/O 2018 - announced a new initiative called Digital Wellbeing that will be available across all platforms. CEO Sundar Pichai, at the event, said that Google wants to help users with their 'digital wellbeing' by understanding their habits and helping curb device addiction. It is creating tools and features that will help people not only better understand their tech usage to focus on what matters most, but also to disconnect when needed as well as create healthy habits for the whole family.

Pichai brought up a very relevant syndrome of our time - FOMO (Fear of Missing Out) - and pointed at the importance of JOMO (Joy of Missing Out) as well. He said that "life, not the technology in it, should stay at the front and the centre." The new feature will be available along with Android P, the latest version of the operating system. A previous report had claimed that Google is working on a new set of new controls to its Android operating system, oriented around helping individuals and families manage the time they spend on smartphones.

With the new feature, Google will be introducing new ways to keep you more informed about how you interact with technology. You will be able to learn more about your time spent in apps. The app dashboard will provide you the entire picture of how you use your smartphone. You will get a daily view of the time spent on your handset, how frequently you use different apps, and how many notifications you get.

Along the theme of Digital Wellbeing, the company also unveiled features like App Timer, which lets users set time limits on apps, and nudging them when they are hitting that limit with little gestures like graying out the app icon. A new Do Not Disturb mode will advance beyond silencing phone calls and notifications, extending to suspending all visual interruptions that may pop up on the screen. A shortcut to this feature can be enabled – simply turning the phone face down on a table. The last feature introduced along this front is Wind Down, which at a preset ‘bedtime’ will turn on night mode, turn on Do Not Disturb, and fade the screen to grayscale, all in an effort to help you wind down and hit the bed.

The Digital Wellbeing feature will also be available on YouTube. Users will be able to schedule custom breaks to step away for a while. Also, the 'time watched' profile will give you a closer look at how much time you spend on YouTube, as well as comparisons to previous time periods. At the event, the company also reiterated features of the Google Assistant, which, it said, helps you "do more without reaching for your device."

In a blog post, Google has detailed all the ways, in which, it helps users get less distracted because of technology. It noted several such features in Gmail, YouTube, Google Photos, as well as Android.

We discussed the most important things that Google did not mention during its I/O 2018 keynote, on Orbital, our weekly technology podcast, which you can subscribe to via Apple Podcasts or RSS, download the episode, or just hit the play button below.