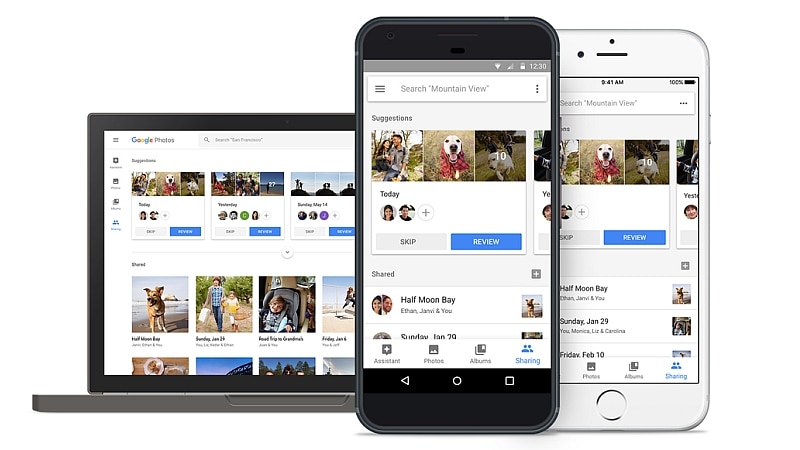 At the opening keynote address of the I/O annual developers conference, Google announced a number of new features, services and developments across its apps as well as improvements to its AI and machine learning efforts. After announcing its AI-based Google Lens, which is able to analyse and recognise images from the surrounding, Google also announced some new features for its Photos app, apart from hitting the milestone of 500 million monthly active users.

Google at I/O 2017 mentioned the that machine learning has been able to enhance the quality of images, reducing noise and improving pixel quality in Photos. The Google Photos app is now getting some more smart features such as Suggested Sharing (seen above), which uses machine learning to remind you to share photos with those who are on the photos. Sharing activities can and suggestions can be viewed in the new Sharing tab that will be rolling out on Android, iOS and web in the coming weeks.

The next feature is called Shared Libraries (seen below) that lets you share the photos you upload with one person. Whoever you select, you'll be able to give full access to your photo library or photos of certain people or from a certain date. You can also save the photos when they share their libraries with you. Shared Libraries will be rolling out on Android, iOS, and Web in the coming weeks.

Google wants to bring back the fun of owning physical photo albums with Photo Books (seen below). This new feature will pick out the best photos and organise them by people, places, or things. This will minimize the effort of having to search through a trove of photos just to pick out a few good ones. Once selected, you can place your order for a Photo Book. Google also hopes to bring suggestions for Photo Books in the future. Photo Books is rolling out today in the US on Web, and on Android and iOS next week, starting at just $9.99 for a 20-page softcover book and $19.99 for a hardcover book.

Finally, Google also announced some upcoming Lens features for Google Photos, including the ability to recognise what's in an image, including identifying buildings in cities and paintings at museums.