Google is enabling users to have up-to-date Android apps all the time - without making any efforts to download them by visiting Google Play. The new experience comes from an In-app Updates API that is currently in testing with early access partners and will reach developers in the coming future. The API provides a couple of options to Android developers to push latest updates to their apps. While developers can pick the full-screen experience option to push critical updates, there is also a flexible update option that lets users keep using the app while the update is downloaded and installed.

"We've heard that you'd like more controls to ensure that users are running the latest and greatest version of your app," said Stephanie Cuthbertson, Director of Product Management, Android, in a blog post. "To address this, we're launching an In-app Updates API. We're testing the API with early access partners and will be launching it to all developers soon."

The API gives developers an immediate in-app update option that can be used mainly to push critical updates. This option essentially brings a full-screen experience in which users will receive a pop-up to install the important update, and once hitting the update button, the app opens a full-screen window to show the update progress.

If an update is a part of regular changes and doesn't have any major security fixes, developers have also been provided with the flexible in-app update option. This mainly lets users keep using the app while the update is downloaded in the background. 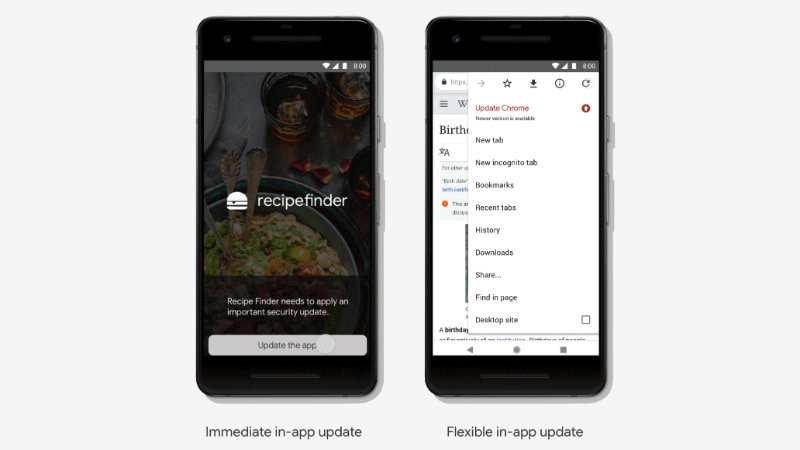 Google says that developers will have the ability to completely customise the update flow to match it with the interface of their apps. This means there won't be a single in-app update experience for all apps.

It is unclear that when can we see developers deploying the In-app Updates API for their apps. However, Google affirms that this won't take much time and all app developers will receive its access soon.