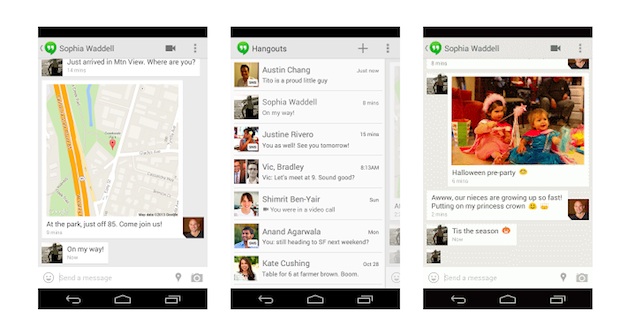 In line with previous rumours, the app now allows users to send and receive SMS messages eliminating the need for users to use the Messaging app for just sending messages. The unified instant messaging and chat feature now makes Hangouts similar to Apple's iMessage platform that uses one app for both SMS and instant messaging, and the Windows Phone Messages app that also integrates online instant messaging services.

The updated Hangouts app also allows users to share a map of their current location with messages. This can be done simply by tapping on the location button located just next to the text input box. Users will also be able to send animated GIFs and see them inline when they receive them, within the Hangouts app.

According to Google, the updated Hangouts Android app will be rolled out in the next few days.

Google has also announced a slew of new features for the web version of Hangouts, offering more control over live video hangouts. It now allows organisers of hangouts to oust unwanted participants or turn up the volume on others.

Google had announced Hangouts, a unified messaging service that merged its various messaging platforms including Google Talk, Google+ Hangouts, Messenger and Google Talk for Google+, at the Google I/O event in May. It only offers text and video chat at the time of its rollout.

The Hangouts app was released on Android, iOS and for Chrome (as an extension) allowing users to share text, photos and live video with each other after signing in with their Google account credentials.
Comments