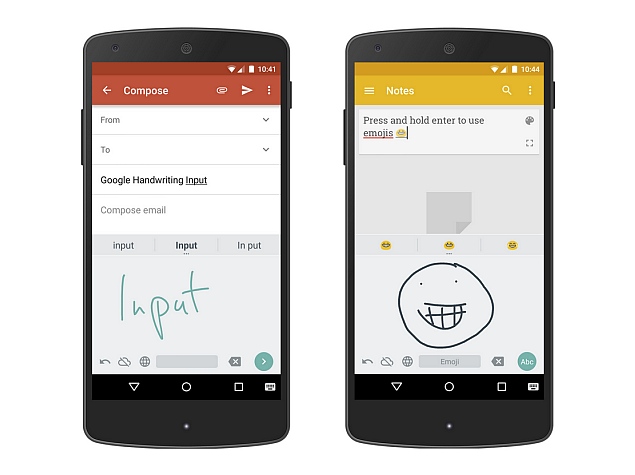 Google on Wednesday released a new input app named Google Handwriting Input for Android smartphones and tablets. Like a keyboard app, once enabled, the app allows for handwriting input across other apps.

As the name suggests, the app lets users input both words and emojis by hand-drawing the words or shapes. The app supports 82 languages in 20 distinct scripts and says it can be mainly useful for "languages that can be challenging to type on a standard keyboard."

The Google Handwriting Input app also works with printed and cursive writing input, even without a stylus. The app by default uses Google's light teal colour scheme, which users can also change to dark theme. Option to choose from local or cloud-based handwriting recognition is also included.

The app is sized at 11.83MB, works with Android 4.0.3 Ice Cream Sandwich and later OS versions, and is already available for download from Google Play.

Talking about keyboard apps, last month Fleksy announced that it will be fully free for Samsung Galaxy S6 and Galaxy S6 Edge owners and will also include full keyboard functionality and premium themes, which together cost $10.

SwiftKey in February this year introduced emoji prediction for iOS devices, introduced key-click sounds alongside the support for 11 additional languages. Swype on the other hand, introduced Android 5.0 Lollipop-based themes (Light, Dark and Bumble Bee), detachable keyboard for Android tablet users, new languages and more. Also, included was the emoji support in eight languages. Some of the other features added were Korean initial consonant, performance improvements related to connected services, and few bug fixes.