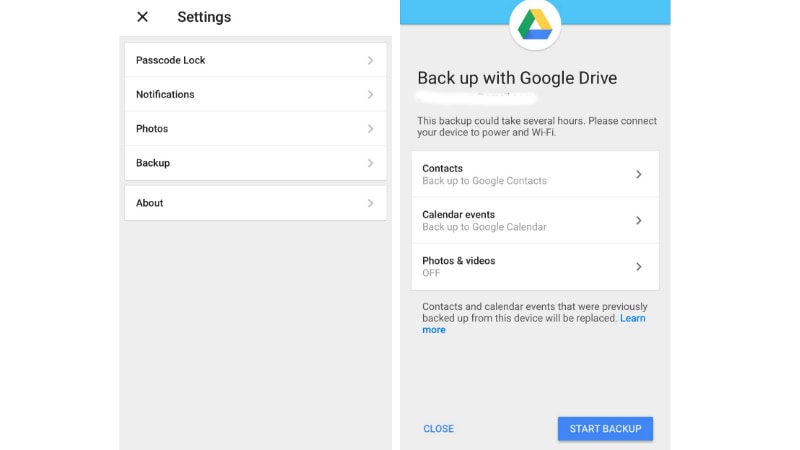 In another effort to ease the transition from iOS to Android, Google has updated its Google Drive for iOS app to make the transition simpler. Many users often find it hard to shift to an Android device after using an iPhone, as transferring data is a long and tedious process. However, with this latest update, Google Drive tries to make things easy with its new 'Backup' feature.

When making the switch to Android, iPhone users should download the Google Drive app from the App Store, and ensure that their app is updated to the latest version. Once the app is installed, sign in using the same Gmail ID that will be used when switching to Android. Once you do that, open the backup wizard by heading to Menu > Settings > Backup. Choose the content that you want to backup, and simply start the process by selecting Start Backup.

(Also see: Google Makes It Easy to Switch From iPhone to Pixel Phone With Adapter)

Users can backup their contacts, calendar events, and even photos and videos to the cloud. Google Drive will pull the contacts and save them in Google Contacts; it will pull the calendar events and save them in Google Calendar, and upload all the photos and videos to Google Photos. Google notes that this backup could take several hours depending on the amount of content, especially photos and videos. Therefore, it is recommended to keep the device on charging and be around strong Wi-Fi connection.

Once the backup is done, the user can go ahead and sign in to the Android smartphone using the same Gmail ID, and all the content - including Calendar events, Contacts, Photos, and Videos- will automatically be synced to the new smartphone without any hassle. If you have a Pixel device, you can even use the bundled adapter to transfer all data, while other Android smartphone users can opt for this method.

(Also see: Apple Now Makes Android Apps, Including One That Will Help You 'Move to iOS')

Google has also introduced a dedicated tab for Backups right on the home screen for Web and Android clients as well for users to tweak and delete backups of desired apps when necessary.