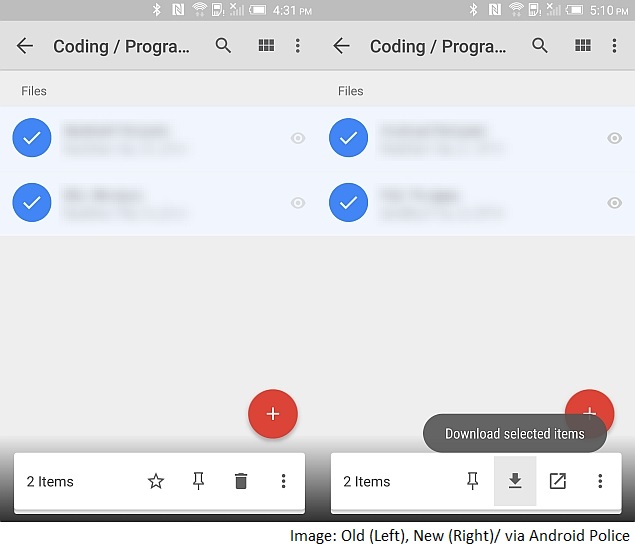 Google, after bringing a bunch of updates to Google Play Music, has now updated its Google Drive application bringing new features and some changes in the user interface.

The latest version of Google Drive app for Android now gets the ability to download and send multiple files in the background at the same time. The update adds a couple of actions to the multiple-selection interface. While the 'down arrow' button is for downloading the selected items, the 'diagonal upwards arrow inside the box' symbol is for sending the selected items to others. The two buttons replace the 'star' and 'trash' symbols, both of which have now been put inside the overflow menu.

The sharing interface of Google Drive has also been changed. The 'Add People' section has completely been overhauled by the firm, improving the contact's visibility by expanding the invite list and showing a mini card for each individual. Upon choosing the individual, users would also be able to view their email address. The search engine giant has said the update will reach Google Play over the next week.

Last month Google expanded the OCR capabilities within Google Drive by adding support for over 200 languages. Google Drive has been using OCR (optical character recognition) technology to allow scanned documents uploaded to the cloud storage service to be edited and indexed. Google stressed that the reason to expand the OCR capabilities is that most of the information in the world is still stored in physical forms (books, newspapers, and magazines among others) and not digital.

The firm earlier this week introduced a free tier for its music streaming service and brought several changes in its Google Play Music application. The Mountain View firm has also updated Google Calendar for iOS and its YouTube app for Android.