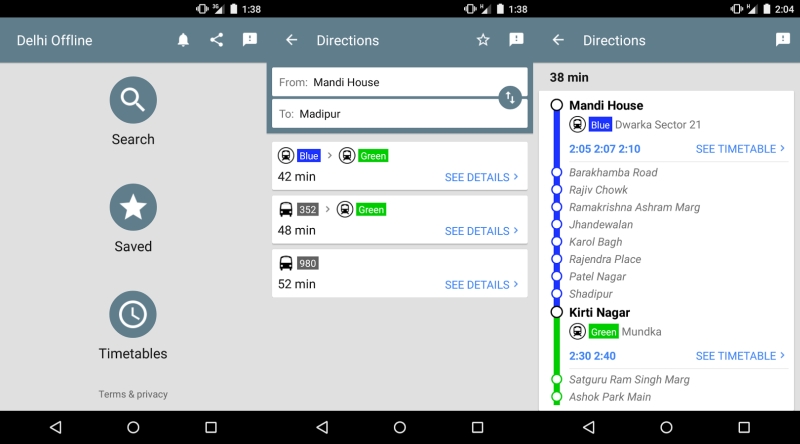 Google on Wednesday released the experimental Delhi Public Transport Offline app, which is designed to help people navigate their way around the capital's public transportation system even without an active Internet connection. The app is free to install and use, and supports DMRC Metro, DTC bus, Gurgaon Rapid Metro, as well as DIMTS Orange buses.

Gadgets 360 first reported about the app in August, when the code for this app was first noticed during a teardown of the last version of Google Maps.

The Delhi Public Transport Offline app lets you search for directions to metro and bus stations, look up their timings, and plan your travel routes, even when offline. When you're online, the app can also give you Delhi metro and bus transit news and delays.

On the Google Play listing, the company has pointed out that this is an experimental app from the Google Maps team, designed from the ground up to make it easier for New Delhi residents to get around on public transit, and it notes that features may change quickly based on usage and feedback from users.

While it's a good feature to include and one that has been needed here for a long time now, it's curious to see why Google isn't including this as a part of the Maps application, and instead is making it a standalone app.

Perhaps that's because Google has made this a very basic application in terms of design. The UI follows the now familiar card-based approach, but with very little by way of decoration or images. The entire app is almost wholly plain text, but that actually makes it look very readable, which will be an important consideration especially in India, where lower-end devices with small screens are big sellers. That would also explain the offline focus, as mobile Internet in India remains fairly unreliable, even as it becomes increasingly widespread.

'Restaurant OS' Will Talk to All Food Tech Startups So You Don't Have To
The King Headphone Amp, Crowdfunded for Audiophiles