Google India on Tuesday announced a bunch of new features arriving on Google Chrome for Android, updating the Data Saver. Google Chrome can now save music, videos, and webpages to view later along with all the rich content. Besides, users in India can now save data using Chrome Data Saver on videos. That said, Google Chrome on Android will automatically optimise websites and pages just to the bare essentials when 2G or slow networks are detected. The features are available on the Chrome Beta channel, but will be rolled out to the stable channel in the coming weeks.

The search giant on the occasion of its 18th birthday has announced a series of new features and products at event held in Delhi. In order to cater to the ever-increasing Internet users in India, Google has primarily focused on areas with low Internet penetration. The new update to the Google Chrome will now support MP4 videos, which will let users save up to 67 percent of their mobile data.

At the launch event, Rahul Roy-Chowdhury, Vice President - Product Management at Google's Chrome division, said,"Our mission on the Chrome team is to move the web platform forward". Elaborating more on Google's vision for India, he explained that the download button on the new Chrome will save your music, videos, and webpages under the Download section, which can be accessed later in the offline mode. The running downloads will automatically pause when Chrome detects an unstable Internet connection, and will resume as soon good Internet connectivity hits in. 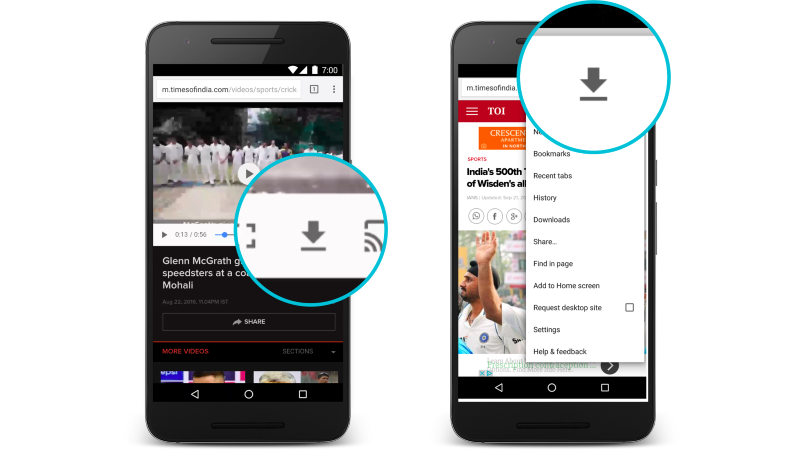 You will now miss playing that addictive Dino game on Chrome now, as there will be no offline dinosaur in the case of Internet absence. The new download manager on Google Chrome will automatically save the webpage for later access, sans Internet.

Striking exactly at the core of low Internet connectivity issues, Google has come up with a new service called Google Station. Google Station is set to provide partners (like RailTel for RailWire) the software and guidance on hardware to turn fibre connections into fast, reliable and safe Wi-Fi zones. Users can use a fast Wi-Fi experience with a simple and unified login, while making it much easier for venues to manage their networks.

Google has also launched its new app called YouTube Go to serve users who are eager to play YouTube videos in low Internet connectivity with offline saving capabilities. Besides, a bunch of updates have been announced for Google's recently launched messaging app Allo, Google News, and Google Play.