Google on Wednesday announced that it is bringing a few updates with the next release of its Chrome browser (version 70) to give clarity on the issues that emerged with the Chrome 69 build that automatically signs you in once you use a Google service. The Chrome 69 build faced huge criticism from users since it unifies the sign-in process between the Web browser and all Google services, such as Gmail, Google Drive, and YouTube among others. It essentially signs you in whenever you log in to any Google service and once you sign out of the browser, it signs you out from all your Google service accounts as well. Google claims that the recent move was aimed to simplify the way Chrome handles sign-in and especially helps the users who share their devices without signing out from Chrome. However, many users with more than one Google account found it difficult to access Google services using multiple accounts.

With Chrome 70, set to be released in the middle of October, Google is adding a control that lets you "turn off linking Web-based sign-in with browser-based sign-in." This gives the control to the user end to either unify the sign-in of Chrome and Google services or to separate them from each other. If you disable the sign-in consistency, signing into a Google service will not sign you into Chrome.

Google is also updating the user interface "to better communicate" the sync state of users. This means instead of merely changing the little user profile icon that sits on the top-right side of the Chrome browser, Google will clearly show your sign-in state and whether or not you're syncing data to your Google account. There will be a sync icon on top of your profile icon to confirm the syncing process with your particular Google account. Once you signed in using a Google account, the browser will also include a Turn on sync... button to let you turn on the syncing process. Similarly, you'll be able to resume the syncing process even after signing out of a Google service. All these changes will be available once you click your profile icon on the Chrome browser. 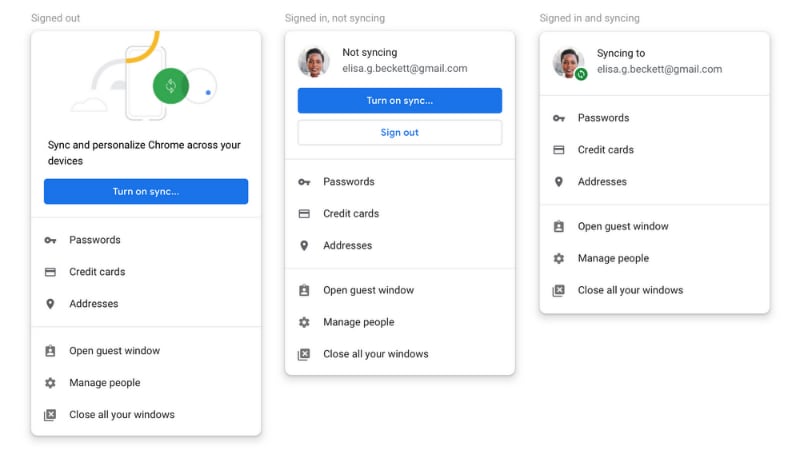 Moreover, Google is also changing the way it handles the clearing of auth cookies. "In the current version of Chrome, we keep the Google auth cookies to allow you to stay signed in after cookies are cleared. We will change this behavior that so all cookies are deleted and you will be signed out," says Zach Koch, Chrome Product Manager, in a blog post.

Notably, the blog post revealing the new changes reiterates the fact that the unified sign-in process in Chrome 69 doesn't mean that Chrome sync gets turned on automatically. It instead signs you into Chrome once you access a Google service. To enable syncing of your b

Further reading: Chrome 70, Google Chrome, Chrome, Google
Jagmeet Singh Email Jagmeet Jagmeet Singh writes about consumer technology for Gadgets 360, out of New Delhi. Jagmeet is a senior reporter for Gadgets 360, and has frequently written about apps, computer security, Internet services, and telecom developments. Jagmeet is available on Twitter at @JagmeetS13 or Email at jagmeets@ndtv.com. Please send in your leads and tips. More
How Amazon Delivers Packages in One of the Most Remote Corners of India
Google to Acknowledge Privacy Mistakes in US Senate Hearing: Official Documents