Google Chrome 42 for Android and iOS Now Available for Download 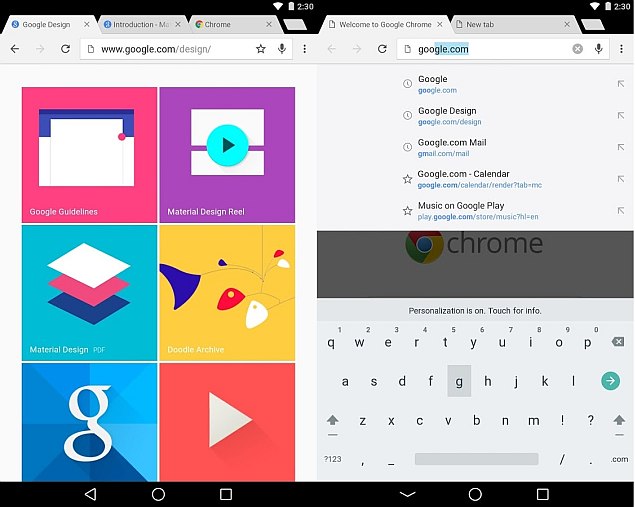 Soon after rolling out Chrome 42 with new features for Windows, Mac and Linux, Google on Thursday pushed out Chrome 42 for Android and iOS. The browser updates feature some major design changes, extensions for more apps, and more. The company has also updated Chrome OS to version 42.0.2311.87.

Google Chrome for Android, like the updated desktop version, brings support for push notifications from websites, eliminating the need for users to manually keep track of notifications. Another new functionality featured is the ability to add sites to the browser's home screen. Chrome will over time detect which websites the users frequently visit and will show the option to place the website on the home screen. Bug fixes and other minor tweaks are also included. The updated app is available to download from Google Play.

For iOS devices, the latest Google Chrome update comes with a new Today view widget in the Notification Centre and lets users access voice search from anywhere on the device. Once added, the Chrome widget will open a new tab in the browser or voice search once swiped down. In addition, if you copy any URL from any app like Safari or Twitter, the same URL will also appear on the widget. On tapping the URL inside the widget, the link will be opened directly in Chrome.

Chrome 42 for iPhone and iPad, besides supporting app extensions like 1Password and LastPass, now features a share/action button on top right corner of the window under the three-dot 'More' section. 'Pull to refresh' view has also been introduced in the latest browser version. Users can even drag down and swipe left or right to open a new tab or to close a current tab respectively. The updated app is available to download from the App Store.

Google has also updated Chrome OS, bringing it to version 42.0.2311.87 and adding new features alongside with some visual changes. As a part of the visual change, the Files app has been refreshed and now sports a Material Design user interface.

The Calculator app has also been updated with certain tweaks, alongside the support for password-protected zip files. The updated Chrome OS also changes the default typeface on all the Chrome OS devices to Roboto for Latin, Greek and Cyrillic scripts. Number of bug fixes, security enhancements and performance improvements has also been added. As per Google, the update will reach the Chrome OS devices in the next few weeks.

In the meanwhile, Google also announced it will be extending support for Chrome on Windows XP till the end of 2015, providing regular updates and security patches. The company had previous said it would support its browser on the platform till 'at least' April 2015. It's April 2015 now, and we're extending that commitment.