A week after updating its Hangouts app with smart suggestions, Google on Thursday announced that users will now be able to again set their statuses on Hangouts in Gmail. Notably, the tool was already available in Google Talk, however it got sidelined ever since the introduction of Hangouts. The firm also updated the app for Android devices that support voice-calling feature.

Announcing the new Hangouts for Gmail, the Gmail's Google+ account posted on Thursday, "Status messages for Hangouts in Gmail are 'available' starting today! Status messages make it easy to tell your Gmail contacts what you're doing - whether you're going on a trip, working from home on Tuesday, or thinking about adopting a puppy."

The post added that users would also be able to see their friends' statuses under the 'Contact' tab placed at the bottom left corner of Hangouts. Gmail users who are still using the old Hangouts in Gmail can simply tap on their photo icon and click on "Try the new Hangouts."

When clicking on a user's own name in the new Hangouts, the section will show the status bar, followed by notification settings and other options including Archived Hangouts, Invites, Hidden Contacts, Blocked People and more. Users will also be able to choose from a number of emoticons that symbolise the user's mood for the day. 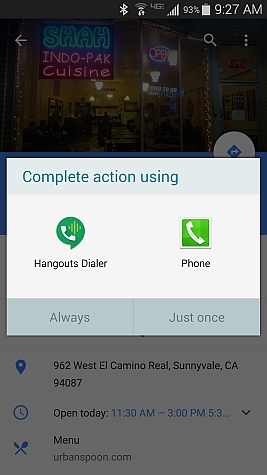 Google also rolled out an update for its Hangout app for Android. The update now lets users select Hangouts Dialler as the default app for making phone calls. The option is seen when users tap on phone numbers and see a "Complete Action" dialogue before making the phone call.

"Today we're launching an update to Hangouts Dialler. You'll now be able to use Dialler to place calls initiated from other apps like your browser or Maps, directly from the Hangouts Android app. Just select Hangouts Dialler when you're choosing your call method," confirmed Mayur Kamat, Product Manager, Google Voice and Hangouts on his Google+ page. The updated Hangouts app is available to download from Google Play, however may not have rolled out to all regions yet. Impatient users can side-load the updated app via a Google signed-apk file via Android Police.