Google Assistant vs Apple's Siri: The Voice-Based Virtual Assistants Face Off on Video 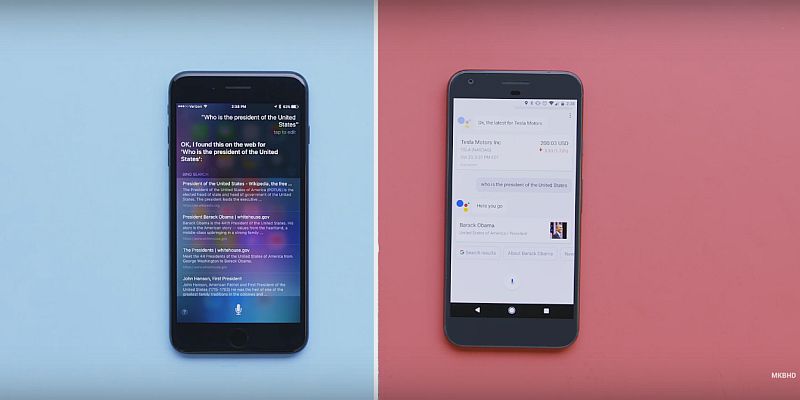 Google Assistant made its voice-based virtual assistant debut on the company's Pixel and Pixel XL smartphones, and has been marketed as the biggest highlight of the new hardware. Since its debut, the new Assistant has been promoted as a voice assistant that ups the competition against the likes of Apple's Siri, which arguably has improved over steadily the years. While Google Assistant, very much like Google Now, is present on the home screen and can be launched by a long-press on the home button. It comes with AI (artificial intelligence) smarts and will be able to contextualise the information it digs up through earlier interactions with the user.

Now, YouTuber Marques Brownlee has done an extensive comparison video where Google Assistant and Apple's Siri have been in an actual face-off. The YouTube video shows the Google Pixel XL featuring Assistant and iPhone 7 Plus with Siri. Brownlee in a series of questions shows various use cases in the video.

(Also see: How You Can Enable Google Assistant on Any Non-Pixel Device Running Android Nougat)

Both Assistant and Siri end up with correct answers most of the time though one can notice split second difference between the two at times. The video also shows how Google's Assistant is conversational as well as understands context while Siri sticks with results from third-party search engines such as Bing. One of the biggest advantages Google's Assistant is that it is able to tap into the company's Knowledge Graph and also takes benefit of its AI learning that comes handy in results.

In the video, Brownlee shows how Assistant and Siri are able to control various apps apart from setting an alarm or reminder directly from the voice assistants. Brownlee during the comparison video points out that Apple's Siri is funny and is more "likely a thing to talk to" while the Assistant at times feels more "robotic."

Brownlee adds, "Google tends to read out the answers a lot while Siri will just say "Here you go" and then display the results."

OnePlus Sale Diwali Offers: OnePlus 3 and More at Re. 1 During Diwali Dash Sale