Making things easier for novices, Google has now apparently upgraded its Assistant app with a feature that allows you to use your voice commands to troubleshoot problems with your Pixel 2 or Pixel 2 XL. The new development emerges in the midst of some issues that have been encountered on both the latest Google flagship models.

The latest Google Assistant upgrade initiates a troubleshoot process right by the commands you pass either using your voice or by typing using the virtual keyboard. You can ask the virtual assistant to check the battery health of your Pixel 2 handset or test the camera or even connectivity with your Bluetooth headphones. Also, the Assistant app can set up a phone call or chat with the Google Support team to resolve your issues through a human. 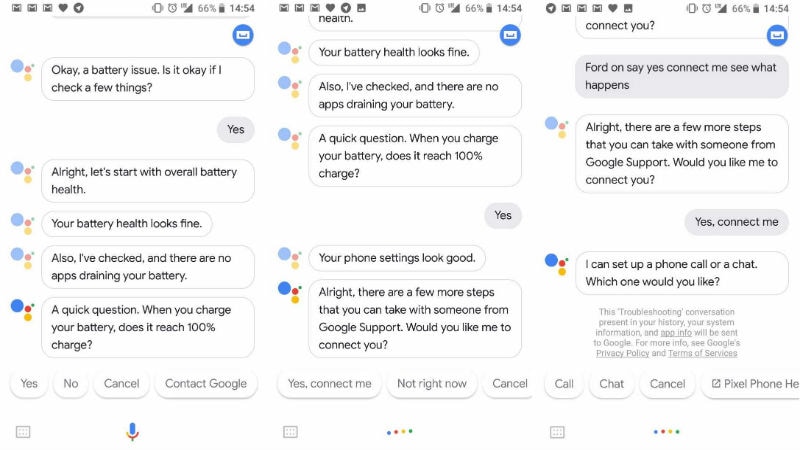 Moreover, the features that Google Assistant has included to troubleshoot your problems come as an extension to the original dedicated live support that was added last month. The previous support was limited to functionality such as providing you with a list of apps that consume the most battery life on your Pixel 2; helping you enable or disable features such as Do Not Disturb, or connecting you with the Support team.

Folks at AndroidPolice reported that the new enhancement was spotted on a Pixel 2 XL running Android 8.1 Oreo dev preview. However, we've confirmed its existence on an Android 8.0 Oreo-running Pixel 2 that has the November Security Patch.

Google may extend the troubleshooting support for all Assistant-integrated Android devices in the coming future. However, the upgrade appears to be so far restricted to the Pixel 2 and Pixel 2 XL. We've reached out to the company for clarity.

Earlier this month, Google's Pixel 2 and Pixel 2 XL were reported to have a conflict with branded Bluetooth headphones that emerges through Google Assistant. Some Pixel 2 XL users also complained about unresponsive edges on the display panels of their handsets. Google had confirmed the fixes for both the issues, albeit updates are yet to be rolled out.