Google Assistant Now Understands Hindi, but Only for a Few Queries

Google Assistant has started understanding Hindi for users who have set the language preference on their Android devices to English (India). With the latest move, Google has taken a step ahead of Amazon's Alexa and Apple's Siri, which are yet to support the Hindi language. The Hindi support is not completely new to Google Assistant as Google Allo received a native Hindi Assistant back in December 2016, and Google showcased a specific Google Assistant version for Jio Phone with support for both English and Hindi languages at Google for India event last month.

The support to understand Hindi on Google Assistant is currently limited in nature. You can start passing your commands in Hindi just after activating the virtual assistant by saying "Hey Google" or "OK Google" hotword. The assistant transcribes the command to English but replies back to you in Hindi. Likewise, you can transliterate your Hindi queries in English to receive responses from Google Assistant. The responses can either be in English or Hindi, depending on the availability of the results. 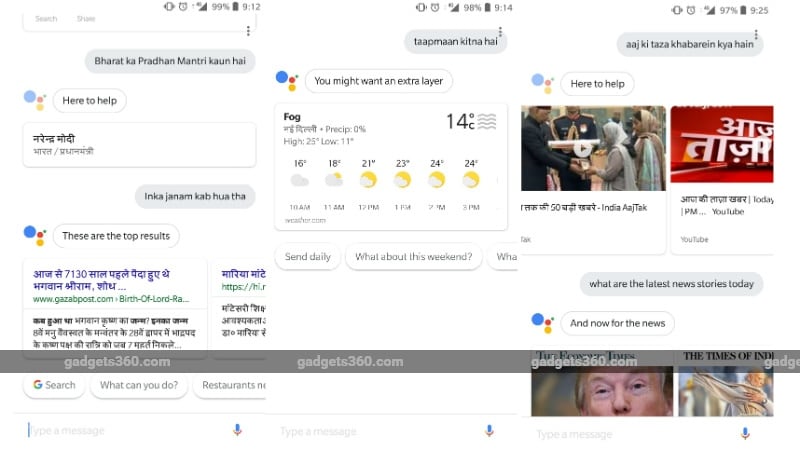 You need to set English (India) as your primary language on your Android device to enable the ability on Google Assistant to understand your Hindi queries. To set English (India) as the primary language, you need to go to Settings > Languages & input > Languages > Add a language > English (India). Once it's set, you just need to press and hold the home button and then tap the microphone icon from the bottom centre or say the hotword to start using Hindi on Google Assistant. It is worth noting here that the new development is not available if you've selected Hindi as the primary language on your Android device.

We tested some Hindi queries on Google Assistant on various Android Oreo and Nougat running smartphones, and it works. Moreover, the feature should work on older Android versions as well since Google Assistant received support for Android 5.0 Lollipop and later smartphones recently. The Assistant also lately debuted on Android tablets, though the new ability is not likely to be available on devices other than smartphones as of now due to the primary language limitation.

Alongside starting to support Hindi, Google Assistant has received Actions on Google support in the Russian language. As spotted by Android Police, Actions on Google now lists ru-RU as a supported language to let developers start building their services and apps for Russian-speaking audiences. This comes in addition to various other international languages, including English (India) and English (US).

At the Google for India event last year, Google announced its partnership with local partners and news providers to enhance the amount of content on Google Assistant. The search giant is also bringing a large number of local developer partners on board to bolster its virtual assistant. All in all, the ongoing attempts are strategically designed to give Google Assistant an edge against Alexa and Siri.

Netflix in Talks With Luc Besson for Multi-Picture Deal: Report
Google Aims to Get 'Diverse Perspectives' Into Search Results