Just a day after getting the ability to recognise the song playing in the background, Google Assistant has received a new update that makes it closer to Allo messaging app. The new development brings Allo's daily subscriptions feature that aims to provide users with regular weather updates, quotes, videos, and tips to the Google Assistant app on Android and iOS.

You need to hold the home button on your regular Android or iOS device or squeeze the frame of the Pixel 2 and then say or type commands such as "weather", "quote", "funny video", "fact" or a "tip". Once you've received the content, you can set a regular schedule by asking "send daily". Google Assistant will give you certain schedules through which you can pick the most suitable one to receive the updates on a daily basis. 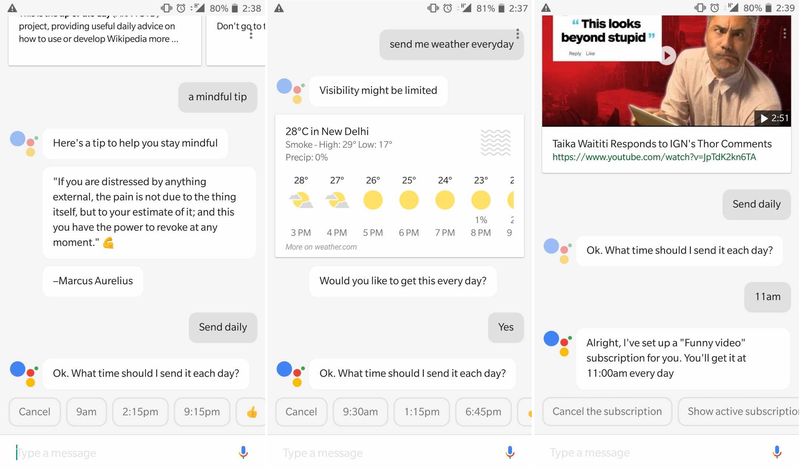 Notably, the daily subscriptions feature is rolling out to Google Assistant through a server-side update. This means you just need to have the latest Assistant version on your Android (the Search app) or iOS (the Google Assistant app) to get the new experience.

The presence of daily subscriptions on Google Assistant makes it an even better virtual assistant and gives a tough competition to Apple's Siri that doesn't come with any regular alerting feature. It would help Google uplift engagements on Google Assistant and will provide content partners another way to reach their audiences on a daily basis. Moreover, the latest attempt gives Google Assistant an edge over Amazon's Alexa that is competing with Google's offering in the nascent market of smart speakers.