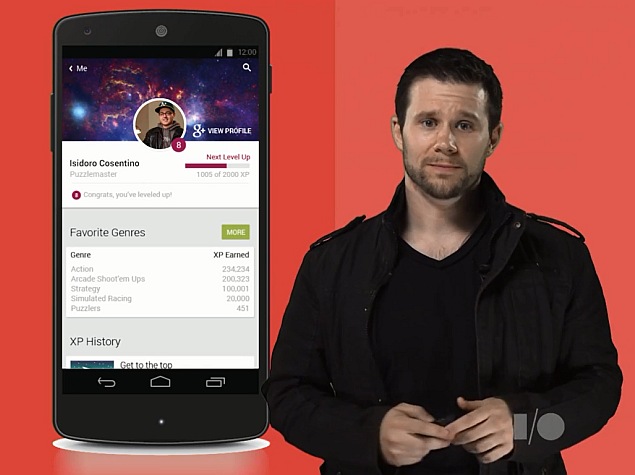 Along with the many major announcements at its I/O Keynote address on Wednesday, Google also revealed that its Play Games service will receive all new features in the near future. The company is preparing its gaming platform for its ambitious Android L release, as well as the Android TV update later this year.

With this every player will be levelled up across the entire Play Games ecosystem based on points and the type of games. Players will also be able to compare themselves against other players. For example, different level game players will now know the other player's gaming level in multiplayer games.

The second big integration in Google Play Games is the new feature called Quests. The team says that with this feature users will be able to create online time-bound tasks in their games and rewards on top of events.

"For example, if players participate in a 'Collect 50 green treasures this weekend's quest, game services will notify your game of who's succeeded after it receives 'green treasures' events from their gameplay," a Google spokesperson said.

The last new Google Play Games feature is called Saved Games, a new cross-platform service that stores the game progress across Android, iOS, and the Web. It means that players on different platforms can start-off with their games where they have left off.

With the Android TV Remote Control app users will be able to user their Android smartphones or tablet as an Android TV remote. Targeted at the developers for applications and games, it offers two modes - D-pad or touchpad. Tapping on the mic button will start a voice search, or text input can be done from keyboard.

Another app for Android TV called the Google Cast Receiver will allow user to mirror their Android devices onto a bigger screen. The app is only available and will be pre-installed on Google-approved Android TV devices.

Finally, the Cardboard app is for Google's inexpensive VR headset, which is described as a "no-frills enclosure that transforms a phone into a basic VR headset". The app comes with open software toolkit, as well a tutorial on how to start coding. Only Android 4.2 or higher devices are compatible with the app. Google has also released instructions on how to build a virtual reality headset to use with the smartphone app on its developer page.