Google has been consistent with its updates for its Allo messaging app since its release last year and the search giant has now added another interesting feature to the app in the form of a new chatbot called "Lucky". While the name might remind you of Google's search engine's "I'm feeling lucky" option, the chatbot has an entirely different functionality - finding GIF images.

Google Allo's new chat bot essentially provides users with GIF images based on their requirements and works similar to Giphy support from Slack, as pointed out in a Google Plus post by Phandroid's Derek Ross. In order to get help from the chat bot, users need to simply type @lucky in the app followed by whatever phrase they want.

For example, if you type @lucky I love you, the chat bot will suggest you with a GIF filled with hearts, as can be seen from the image shared by Derek Ross (below). 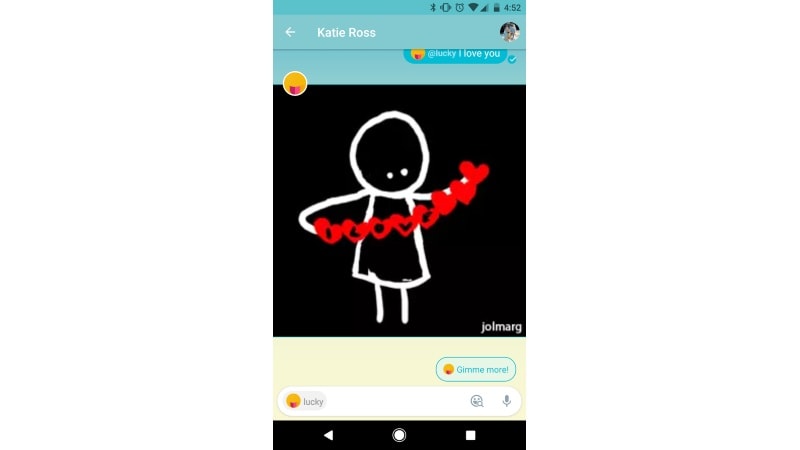 It is unclear if the latest version of Allo is necessarily required for the chatbot but you can either wait for the update to roll out or choose to grab the APK file from APKMirror over here, shared by 9to5Google in its report. The feature has reportedly shown up only for select users as of now.

In another piece of news from the search giant, Google has tweaked the way contacts are displayed inside its Hangouts app on Android. With version 16.0 update, the dedicated contacts list inside the app is not available anymore. The contact list has essentially been divided into those who are available on Hangouts and those who are not. The company claims that the update makes it "easier to find the right contacts quickly." Apart from this, the update also carries bug fixes and improvements.

Hangouts version 16.0 update is already available and can be downloaded from Google Play.