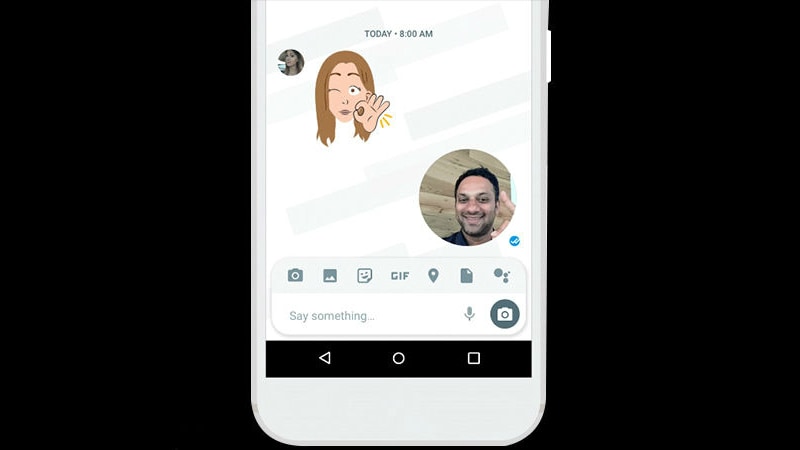 Google’s Allo chat app has been updated once again, and brings a new feature called Selfie Clips. This feature allows users to make GIFs out of the selfie camera, and send them as loops while chatting to another user on Allo. The updated app is available for Android and iPhone.

The Mountain View giant launched Allo last year, in a bid take on WhatsApp and other chat apps out there. The tech giant has been updating the app ever since, bringing new features like chat backups, link previews, personalised selfie stickers, and much more. Google Allo v12 brings the big Selfie Clips feature, along with other changes like a redesigned compose bar.

Selfie Clips essentially lets you use the front camera to make GIF loops of yourself or anything in the front camera view, and send them in chat conversations. Earlier, to send GIFs, you’d have to use third-party material, and a tool to create one was not available in-app. With this update, Allo adds the ability for iPhone and Android users in-app. This feature was announced by Allo team head Amit Fulay. Furthermore, the selfie sticker feature that was only launched for Android first, has now been made available to iPhone users as well.

The new compose bar was also mentioned by Fulay and it basically gets rid of the ‘+’ icon that hid all the compose buttons, and shows them all above the message bar itself. This makes them more accessible than before, as earlier they were hidden behind the ‘+’ button, and could only be seen when the button was pressed.

Android Police also did an APK Teardown to reveal some potential upcoming features. Reportedly, a future update will bring the ability to send messages by pressing the enter button, instead of just hitting the send icon on screen.

Google Allo was also reported to launch its Web client soon, but a recent report suggests that the public launch is still a month or two away.