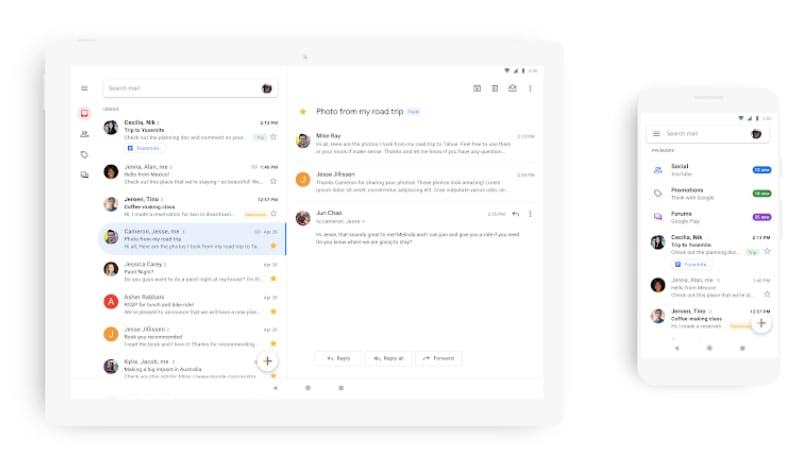 Google is rolling out a revamped version of Gmail on Android and iOS apps. Gmail had already received a major redesign on the Web in April last year, and it seems like the company is now bringing a reflection of the same user interface to its mobile apps for Android and iOS. Google says the update will be rolled out to all users in the coming few weeks. The new design brings some new features to Gmail's mobile app but doesn't include all the features that were released with the Web redesign. Unfortunately, the company did not include a dark mode.

Gmail's new design is based on the Material Theme (previously known as Material Design language). Google is using the custom Google Sans font on the app. There are a few noticeable changes and probably the biggest of them all is the lack of the big red bar at the top. Overall, the app now looks quite cleaner with a lot of white-space. Notably, though, there is a no dark mode - something that may bug smartphone users. Google had back in November recommended app developers start deploying dark modes for reasons that included saving battery life on Android devices, thus it is surprising the company decided to skip out on it. Notably, it brought both dark mode and Material Theme to its Android Messages in its redesign last year.

The fresh design doesn't really bring in a lot of new features. The overall functionality still remains the same. The red compose button has been replaced with a gradient-based plus icon. It's now much easier to switch accounts using your profile image at the top - previously you had to use the sidebar menu. Google says this will make it easier for users to switch between their personal and work email accounts.

Some of the features that have made it from the Web version to Gmail's mobile app include attachment previews. These are available below the messages, making it easier to preview and download attachments with e-mails. Users can also select between 'Compact' and 'Comfortable' view apart from the default view on the mobile apps. Google says it will also serve big red warnings for emails that may seem 'phish-y'.

Google says the revamped Gmail mobile apps on Android and iOS will be rolled out to everyone in the coming weeks. So far, the company has rolled out its Material Theme design on Docs, Calendar, Drive, and Sites on the Web.