Gmail Smart Compose Feature Rolling Out to Other Android Devices 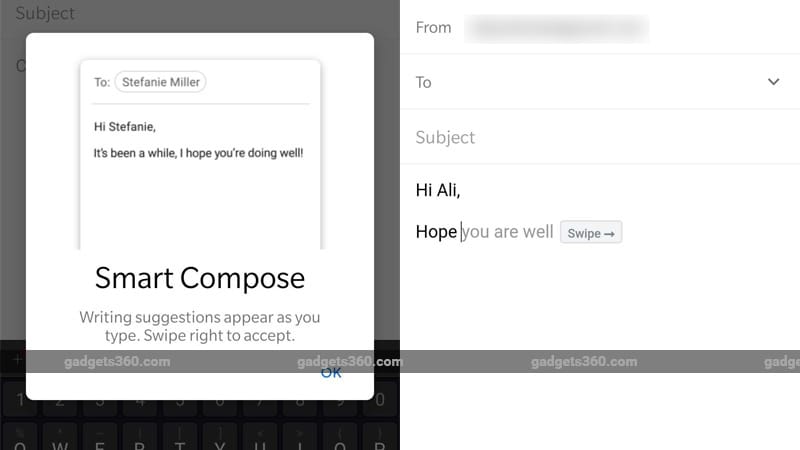 Not all Android phones have Gmail’s Smart Compose yet

Google has been a bit restrictive about Gmail's Smart Compose, right from the time it was introduced in 2018 at Google I/O. It initially rolled out only to the Gmail web version. On mobiles, you could only use this nifty message autocomplete feature if you had one of the Pixel 3 phones. That seems to be changing now as it has been reported that Google is finally rolling out the Smart Compose feature to other devices as well, including third-party smartphones.

Android Police was first to report about the expanded Smart Compose rollout, and we have verified that same on our in-house OnePlus 6T smartphone. It is however unclear how wide this rollout is right now or whether this will become a standard Gmail app feature in the near future.

To use Gmail's Smart Compose on your Android phone, simply start typing your message and you'll get an auto-complete suggestion that you can select by just swiping right. Smart Compose learns from your writing style and combines that with the most common replies or sentences formed based on your first few typed words. This could end up saving you a lot of time in case you have to write a lot of emails as a part of your daily routine.

If you do find this feature annoying or the idea of the your email composer reading your messages creepy, you do have the option to turn it off in the Gmail settings.

The Smart Compose feature was first introduced at Google I/O 2018, where the company touted its AI and machine learning advancements with this new feature.