Gmail Nudge Reminder Feature Rolling Out on Android and iOS 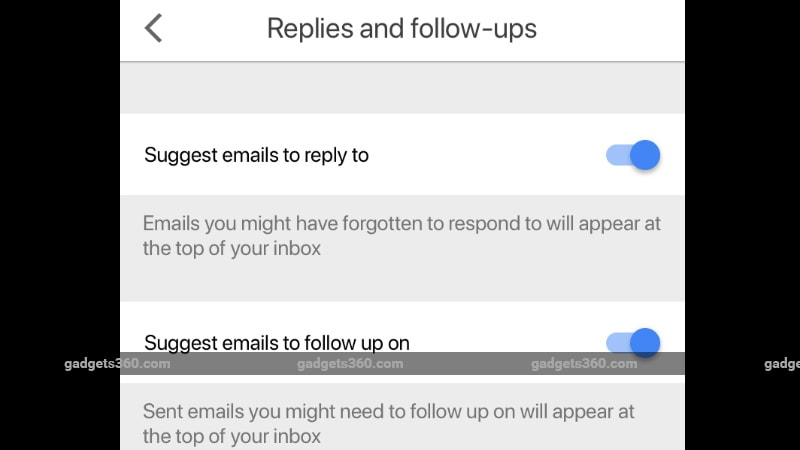 Earlier this week, Google introduced a new Nudge feature on its revamped Web client, and now the feature is showing up on mobile as well. Gmail for Android and iOS now have the Nudge feature enabled by default, and forgotten emails are showing up on top of the list.

This feature seems to have arrived for mobile users through a server-side update. Both Gmail v8.4.22 and the older v8.4.8 for Android can see it, reports Android Police. We can see the feature on our iOS devices as well, running v5.0.180422. The feature rollout seems to be an ongoing process, and if you can't see it yet, you should in a few days. To check if you have the feature or not, head to email settings on your Android and iOS app, and see if there is a new Nudges option appearing there.

The Nudge feature will essentially remind users to respond to emails in their Inbox. This feature will put emails that you have forgotten to reply to (or follow up on), on top of your Inbox list. Gmail client will look for emails that you may have forgotten to reply, and then automatically put them on the top of your Inbox to remind you about it. It will do the same for follow up mails as well. This feature could prove to be useful for all business users who receive tonnes of email, and sometimes amidst all the clutter, they forget to reply to an important mail.

As mentioned, the Nudge feature is enabled by default, which means you'll soon be able to see forgotten mail reminders on top of the email list in Gmail. If you wish to turn it off, head to Gmail Settings menu and you'll see a new option called Nudges. There are two options that are kept on - Suggest Emails to Reply to and Suggest Emails to Follow up on - and you can choose which to switch off according to your preference.

Gmail recently got a big overhaul, and it now comes with several new AI-based features including Smart Reply, email snoozing, and more. Gmail now also includes certain privacy-focused features like a new Confidential mode, a revamped risk warning, and the ability to unsubscribe from newsletters with the click of a button.