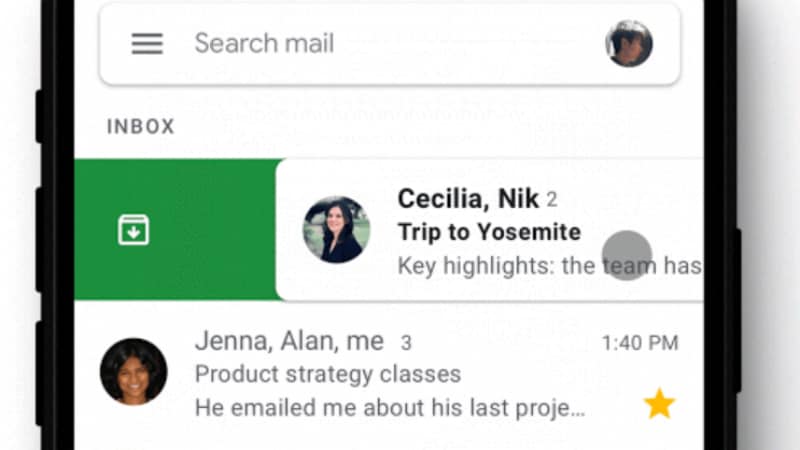 Gmail for iOS has been updated with customisable swipe actions. The new change enables the Gmail app to add swipe actions such as Archive and Mark as read. Google notably added customisable swipe actions to Gmail for Android back in June last year. Gmail also received a mobile redesign along with various productivity improvements earlier this year. That mobile design reached iOS devices last month, shortly after their debut on Android. Importantly, the new Gmail update is at present already started rolling out, though it would take some days -- could be over 15 days to reach your Apple device.

With customisable swipe actions, Gmail for iOS now lets you add options such as Archive, Trash, Mark as read/ unread, Snooze, and Move that can be accessed once you swipe on an email. You can access the swipe configuration settings by going into the Gmail app on your iOS device and navigating to Settings > Swipe actions.

Alongside adding the ability to add customisable swipe actions, Gmail for iOS has been updated to let you use swipe actions to triage your notifications. "For example, if you like to snooze emails, you can press firmly (3D Touch) or long press on a Gmail iOS notification, and click on 'Snooze' directly to pick the date and time when to snooze the email until," the Gmail team writes in a blog post.

The blog post also confirms that the new changes are being rolled out to Gmail for iOS. However, it is worth pointing out that it could take longer than 15 days for the update to arrive on your iPhone or iPad.

Meanwhile, you can download the latest Gmail for iOS version (v6.0.190309) directly from the App Store. The app is compatible with iPhone, iPad, and iPod touch running iOS 11.0 and later.

As we mentioned, Google initially brought customisable swipe actions to Gmail for Android last year. The company also brought mobile redesign along with various productivity improvements in January this year that made way to iOS last month.