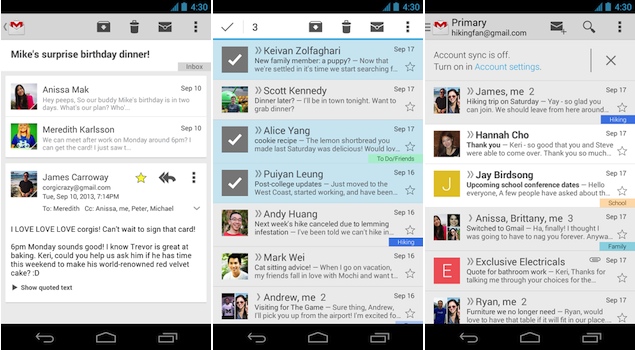 Google has updated the Gmail for Android app with a new, cleaner conversations view design inline with Google's cards style, which was first seen in Google Now.

The mail conversation threads now appear as cards with the three dots representing the menu, an element borrowed from the Holo design language and the reply and star buttons. It now looks much cleaner and streamlined. The usual sidebar menu is hidden at the left and can be revealed by  tapping on the menu button at the top.

The update also brings a number of other design tweaks including checkmarks for multiple message selection so users can easily see what messages they are about to move, archive or delete. Previously, selecting multiple messages just made them appear blue.

Following the update, the app will also tell users if account sync is off, right in the inbox, so that they don't miss an important message accidentally.

The updated app is available for download through the Google Play Store.

Google had earlier rolled out a tabbed interface allowing users to filter mails and group them into categories such as Main, Social, Offers, Notifications, and Forums, depending on their preference, to Gmail's iOS and Android apps, in addition to the web interface. Users can now select the tabs that they'd like to keep, drag-and-drop to move email messages between them. The apps now feature a slider menu that will feature the category folders with colour coded smart labels.