The dedicated 'Video' section appears on the Flipkart app version 6.17.

Flipkart has started rolling out its anticipating 'Videos' service through the latest update of its Android app. The new move comes as a result of the announcement that the e-commerce company made last week pertaining to the debut of its free video service for all over 160 million customers. With the latest development, Flipkart takes on for Amazon India that's offering its Prime Video service in the country for some time. The new venture by the Walmart-backed company would also make the competition tougher for Indian over-the-top (OTT) platforms such as ALTBalaji, Eros Now, Hotstar, and Jio TV among others. Separately, Flipkart has launched an 'Ideas' section that is aimed to offer curated content feeds to help customers pick suitable products online.

While Flipkart hasn't yet confirmed the key players participating in its video streaming service, the company did underline in its last week's announcement to the media that it wouldn't venture into original content initially. The dedicated Video section on the latest Flipkart app for Android devices now shows that the fresh service is at present offering content from players such as Arre, Dice Media, TVF, and Voot.

To begin with Flipkart's video streaming service, you need to download the latest Flipkart app (version 6.17) from Google Play, though, your mileage may vary as the rollout appears to be gradual.

Once you've installed the latest Flipkart version, you need to tap the hamburger menu icon from the top-left corner of the screen and hit the Video option. The app will ask you to pick at least three videos from a list that will kick off personalise the experience and provide you with a curated catalogue of movies and TV shows, though you can further customise this later. The app allows users to follow certain channels or actors to get all their latest videos under one roof. However, you can't choose any particular OTT platform to search for any specific content.

Flipkart has also offered a My List option on to let you save your favourite movies or TV shows. Similarly, a dedicated button to share the video content is available.

The Flipkart app also includes a brief description of the listed content and highlights its total runtime and genres. 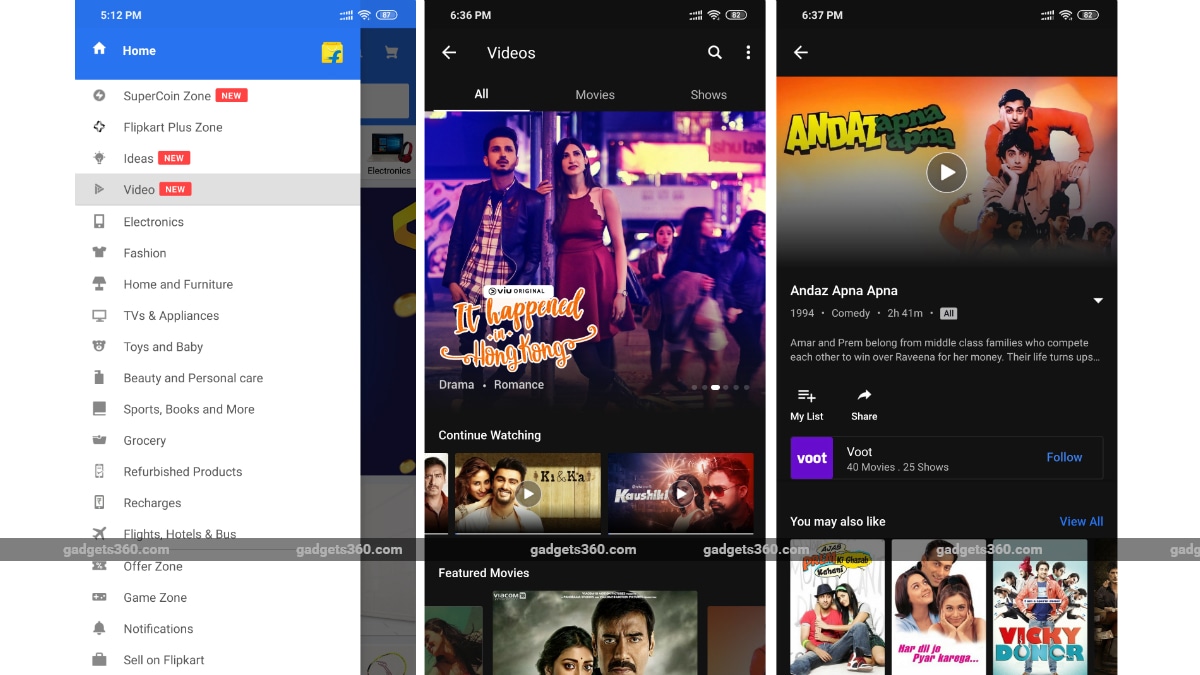 At the time of playback, you can also adjust the video quality by selecting the given options such as Auto, Good, and Data Saver. The app also has an option to switch from one episode to another while watching a certain show. Further, there are buttons to let you skip the content 10 seconds backward or forward.

The overall playback interface available on the Flipkart Videos reminds us of what's available on Amazon Prime Video and Netflix. However, if you're thinking of getting an offline mode for downloading your favourite videos for watching them offline, you don't have that option available as of now. The content catalogue is also initially quite limited with just a handful of vernacular movies and TV shows.

Having said that, Flipkart, unlike Amazon Prime Video and Netflix, is offering its video streaming service for free. A report by PTI last week confirmed that the service will ad-supported, though we weren't able to notice any ads at the time of our brief testing.

Alongside the video streaming service, Flipkart has also launched its Ideas section that brings a curated selection of content to the app. The company said in a press release on Friday that its new move would help customers discover new products and brands "through credible information and bring forth ideas" to let them add new purchases seamlessly. The launch would primarily enable customers in tier-II and III cities to narrow down specific products suitable for their requirements.

The updated Flipkart app for Android includes the Ideas section that asks you to select at least five interests to let the app curate ideas for you. The interests include Gadgets, Women's Fashion, Arts & Crafts, Travel, Reading, and Photography among others.

Once the interests are selected, the app starts highlighting content from brands and influencers with associated products in formats such as videos, GIFs, images, stories, quizzes, and polls. 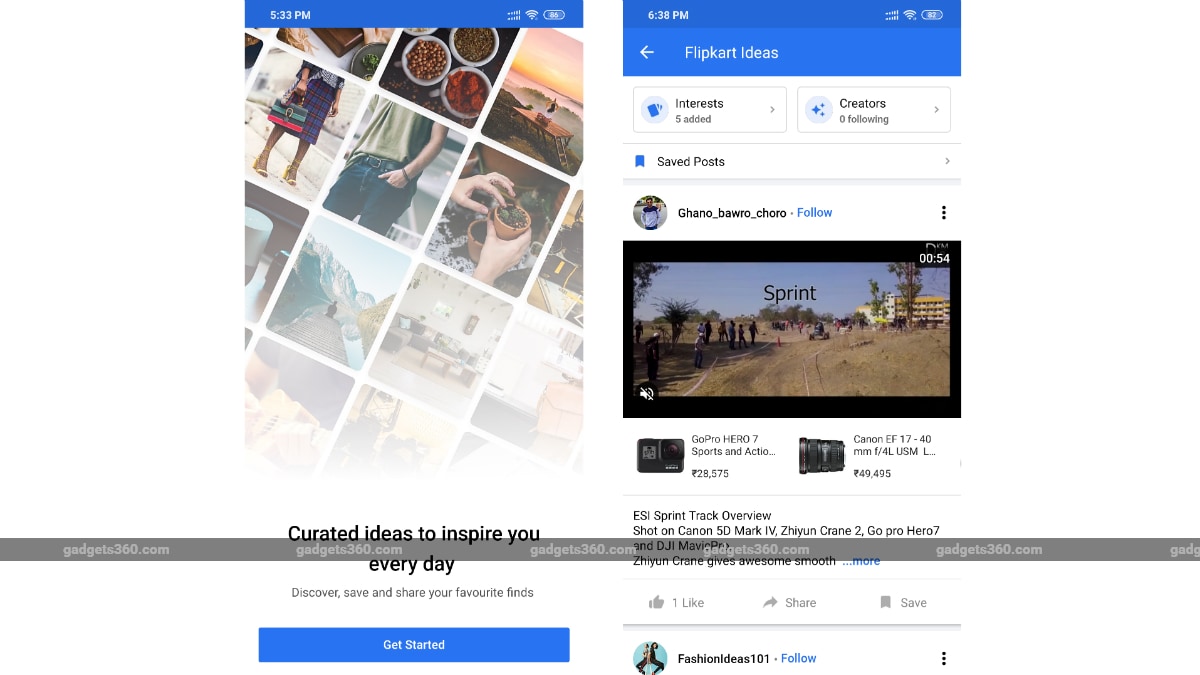 Flipkart Ideas is designed to highlight content from brands and influencers

"Flipkart Ideas improves users' lifestyle with credible, inspiring and useful content, which will educate and inspire them in the purchase journey," said Anil Goteti, Senior Vice-President, Marketplace at Flipkart, in the release. "There are new set of consumers, the next 200 million shoppers, who have a variety of questions and seek to mimic their offline shopping experience, online."

The initial experience on Flipkart Ideas looks similar to Amazon Spark, which was launched in India last year and reportedly shut down in the US just earlier this year.