One of the inevitable and sometimes annoying problems of popular Internet browsers like Google Chrome and Firefox is that they eat up huge amounts of your PC's RAM. Firefox parent company Mozilla had earlier explained the problem is particularly acute on older machines with less memory. To cope up with this problem, Firefox developers are working on a new feature called 'Performance' that will be aimed at lighting up your browser to act swiftly and load webpages faster on sluggish machines. There are a number of other improvements currently in work, confirms Mozilla.

Starting with the new feature 'Performance', it would be a sub-setting under Preferences section that will help you tweak the performance of Firefox to suit the system capabilities. Inside 'Performance', the first option is 'Optimize Firefox' that will kill all the third-party add-ons after you restart the browser. It is a welcome feature considering there are some add-ons that keep updating themselves in the background and may end up eating a lot of RAM. Of course, the add-ons can be re-activated at any time later. 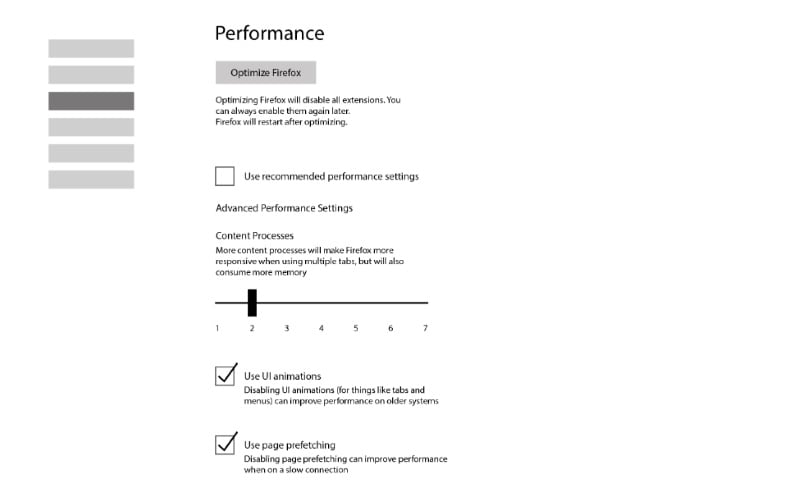 Besides, Mozilla is also adding for the first time an option to let users disable UI animations for browser tabs and menus in Firefox, which is meant to speed up things on older PCs. Also, Firefox will also feature 'Use page prefetching' option that users can disable on slower and spotty Internet connections.

Another feature that is in the works is the addition of multi-threading called 'Content Processes'. Presently, Firefox supports just two processes one for browser UI (core) and one for the core Web pages (called 'web content'). With this update, Firefox will be able to support up to eight (one core and 7 content processes) potential processes at a given time, which will make it work like Chrome, Safari, and Edge. However, it may end up consuming more RAM.

According to Mozilla, while all these features will eventually roll out to users, the timeline hasn't been finalised yet. The Content Processes, for example, feature will not arrive before Firefox version 55 later this year, while the Performance tab will roll out closer to the end of the year.