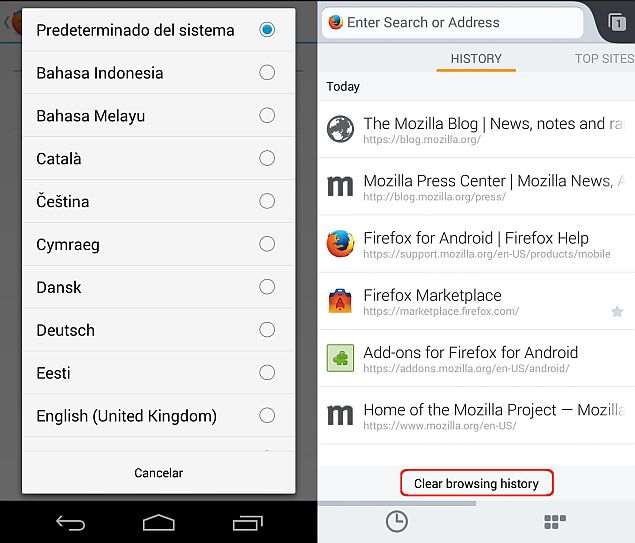 Mozilla has rolled out an update for its Firefox browser's desktop and mobile platforms. The Firefox 32 for Android, Linux, Mac and Windows brings a number of additions, while fixing some major bugs and updating other features.

As a part of the Firefox update, Mozilla introduced a new HTTP cache for both platforms. According to the company, the new cache system will deliver improved performance and easy recovery when facing crash issues.

The Firefox 32 for desktop comes for Linux, Mac and Windows operating systems. One of the key additions in is 'Public Key Pinning', which ensures that users reach the website that they intend to without facing any man-in-the-middle attacks.

The feature was detailed on Tuesday via Mozilla's official blog post. The blog also added that "When the root cert for a pinned site does not match one of the known good CAs [Certificate Authorities], Firefox will reject the connection with a pinning error. This type of error can also occur if a CA mis-issues a certificate. In this way, key pinning can be used by sites to add another layer of trust to their servers' deployment of TLS."

The pinned domains included in Firefox 32 are addons.mozilla.org, and Twitter. Also noted is that Google and other domains will be added in Firefox 33, which the company says will be released in mid-October. The full changelog for the desktop version of the Firefox 32 can be seen on the official website.

As for the Android users, the Firefox 32 has introduced six new languages that include Armenian, Basque, Fulah, Icelandic, Scottish Gaelic and Welsh. Users can now switch between 55 languages in total regardless the language in which the Firefox app was originally downloaded.

Firefox 32 for Android users can now also personalise the home page by adding quick access to their preferred websites. Clearing history is also easier in the new Firefox app by accessing the 'Clear browsing history' control in the history panel.

Along with a new Gamepad API, the Firefox 32 for Android app also introduces support for URI autocomplete on Swype. The complete changelog can be accessed from the firm's official website.