Google's Files Go, the app which was initially designed for Android Go devices, has now been transformed into 'Files' app. The updated app has also included a redesigned interface that is based on Material Theme aesthetics. The app is initially rolling out through a beta channel on Google Play, though its APK file can also be sideloaded to experience the changes. Notably, the primary purpose of the app that debuted with the original Files Go app hasn't been changed as it still lets users easily clean the internal storage of their devices by removing junk files with a single tap. It also gives a single place to browse all the stored files and share files, videos, and apps to their nearby contacts without using any data connectivity.

With the latest update that comes through beta version 1.0.219550556, the Files Go app has become Files. The new moniker appears not just on the icon of the updated app but also through the app launcher. The icon that had the iconic "Go" branding has also been refreshed with just Files title. However, Google is yet to update the name of the app on the Google Play listing.

Apart from the transformation of the moniker, the updated app has Google's Material Theme Design treatment with Google Sans font and new icons. The app's background now also mostly in white colour over the previous grey and blue colour coverings. As spotted by Android Police, the iconography has also been updated with the new outlined style. You can notice some changes by visiting the Browse tab. Similar is the case with the Share tab that has colourful icons over the bluish icons highlighting what all the content the app can majorly share between users. Lastly, the app also has the new branding on top with the new icon that doesn't include the "Go" branding. 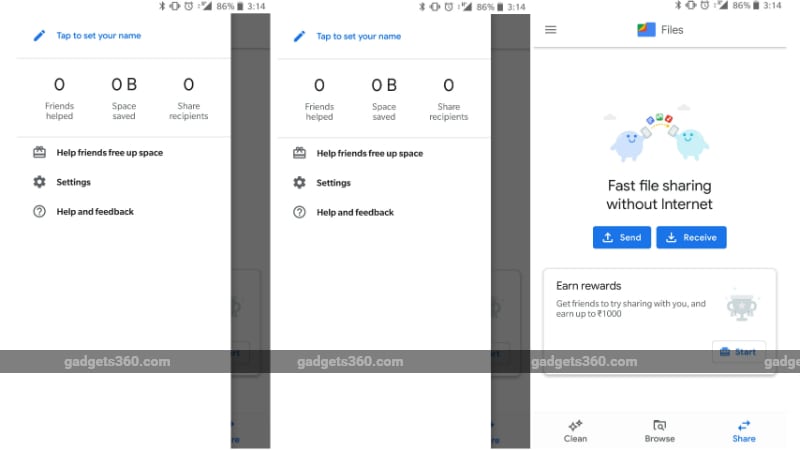 You can take a look at all the minor changes that Google has made to make Files a full-fledged app for all Android users - not just limited to Android Go users - by downloading the latest Files Go beta. To download, you need to sign up for the Google Play beta programme. You can alternatively download the latest beta version in the form of an APK file directly from APK Mirror.

Further reading: Files Go, Files, Google
Jagmeet Singh Email Jagmeet Jagmeet Singh writes about consumer technology for Gadgets 360, out of New Delhi. Jagmeet is a senior reporter for Gadgets 360, and has frequently written about apps, computer security, Internet services, and telecom developments. Jagmeet is available on Twitter at @JagmeetS13 or Email at jagmeets@ndtv.com. Please send in your leads and tips. More
Jio Phone 2 Festive Open Sale to Be Held From November 5 to 12 on Jio.com
Spotify Faults Itself for Margin Gains, Says Needs to Hire More Engineers