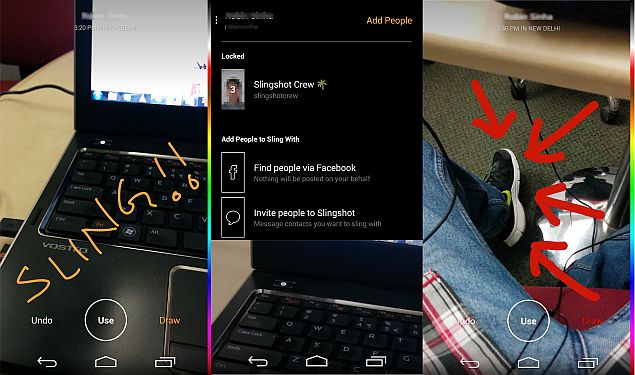 After being briefly listed on the Malaysian App Store, and being launched in the US for Android and iOS users last week, Facebook's Slingshot messaging app has now been made available worldwide.

The news comes from Facebook's Slingshot blog post on Wednesday, which reads, "Since we launched last week, we've heard from lots of people around the world who are excited to give Slingshot a try. Starting today, we're expanding our initial launch and making Slingshot available internationally!"

Unfortunately, the Slingshot app by Facebook is noted to work only with the iOS devices running iOS 7 or higher, and Android handsets running Jelly Bean or higher.

To recall, Slingshot app by Facebook was officially launched in the US last week, and allowed users to exchange disappearing photos and videos without requiring Facebook accounts. The app allows users to sign up for the service with their mobile phone number and connect with friends in their phone's contact list or, if they want, by finding their Facebook friends. Photos on Slingshot disappear from users' phones shortly after they are viewed, reflecting a growing anxiety about privacy in the age of Internet social networking.

Notably, Slingshot, unlike Snapchat and other chat services, forces a user to send an image or 'sling' [as Facebook calls it] in order to view an image. The feature in the Slingshot app is seen as a move to increase the user involvement in the app.

Other features in the app include the ability to write captions and make drawings on the images and video messages sent by a user, something already found on Snapchat. The Slingshot app also offers users viewing a message the ability to send a reaction to an image, with the React button to send the reaction to an image. The app maintaining its ephemeral nature deletes an image once it is swiped away by the user. Users can swipe down from the main app screen to access the settings tab and can access options like Save My Shots, Play Sound Effects, Play Draw Music and Hidden People.

Slingshot app is available to download from Google Play (5.2MB) and the App Store (10.2MB).