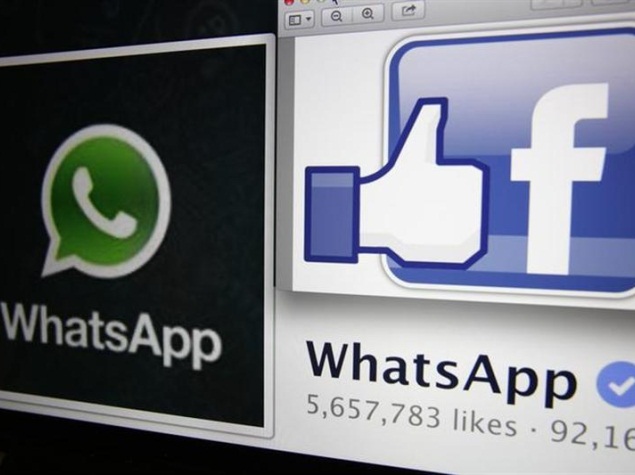 Social networking giant Facebook will have to shell out $2 billion (over Rs. 12,500 crores) if its acquisition of the instant messaging service WhatsApp fails to get necessary approvals.

The California-based Facebook has inked a deal to acquire WhatsApp, its largest acquisition ever, for $19 billion ($4 billion in cash, $12 billion in Facebook shares and another $3 billion in restricted stock). It is expected to close in the current calendar year.

(Also see: Facebook to buy WhatsApp in a $19 billion deal)

The Menlo Park-headquartered firm will also issue a number of shares of its Class A common stock equal to $1 billion to WhatsApp, it added.

WhatApp has 450 million monthly active users and growing by more than one million registered users per day.

One the largest IT deals in recent times, Facebook's announcement dwarfs Microsoft's $7.2 billion acquisition of Nokia's phone business (and Skype for $8.5 billion in 2011), Fairfax consortium's bid to take BlackBerry private for $4.7 billion (which didn't go through) and Google shedding Motorola in a $2.9 billion deal with Lenovo.

Reports suggest that this could probably be the largest Internet deal since Time Warner's $124 billion merger with AOL in 2001.

Facebook has been aggressively ramping up its apps portfolio to beef up its mobile offering as it expects more users to log onto its portal through smart handhelds.

In 2012, Facebook bought photo-sharing service Instagram for about $700 million, while last year its bid to take over Snapchat for $3 billion failed.

Facebook also expects a decline in number of users logging on the social networking website through PCs globally, especially from the US and other developed markets of Europe and Asia.

It has projected that future growth will come from mobile as more and more users in emerging markets (which it calls 'key source' of growth), especially India, log on through their handheld devices.

Facebook's daily active users (DAUs) rose by 22 percent to 757 million during December 2013 from 618 million in the year-ago period helped by growth in major markets including Brazil, India and the US.

Nokia mulls buying Juniper Networks, merging it with NSN: Report
Four messaging apps vying to be the 'next WhatsApp'