Facebook is testing new features in its Messenger app for Android including a revamped UI and the integration of its previously announced 'M' assistant. These features were seen on the beta version of Facebook Messenger, and may arrive in the stable version soon.

Android Police first spotted these changes on Facebook Messenger beta version, and the most significant change was the revamped chat UI. Facebook has tried to reduce cluster, and has made all the UI elements fit into one row, instead of the earlier seen two rows. The plus sign seen in the screenshot below now has all the additional 'less needed' functions like setting a reminder or playing games. The text bar where you usually tapped to start typing a text has now been reduced to a capsule to fit other elements in one row. This new UI reduces cluster, but increases taps to get things done like sending GIFs, emojis, or stickers. However, the UI is more organised than seen in the previous version.

Messenger has also added a notification toggle for app updates, and you can switch it off if you don't wish to be notified every time your Messenger apps gets updated. There's also a new 'Links Open Externally' toggle that lets you choose whether or not you want to use the in-app browser or stick to your preferred one.

Coming to 'M' virtual assistant integration, it has surely arrived in the beta version of Android after being announced in August last year, but doesn't work as promised. The 'M' virtual assistant doesn't do tasks for the user like buying groceries etc, but randomly just shows suggestions of stickers when it sees wishes being exchanged in conversations (that too not all times). But, of course, this is the beta version, so the 'M' assistant may be buggy, and the stable release should be able to do much more. 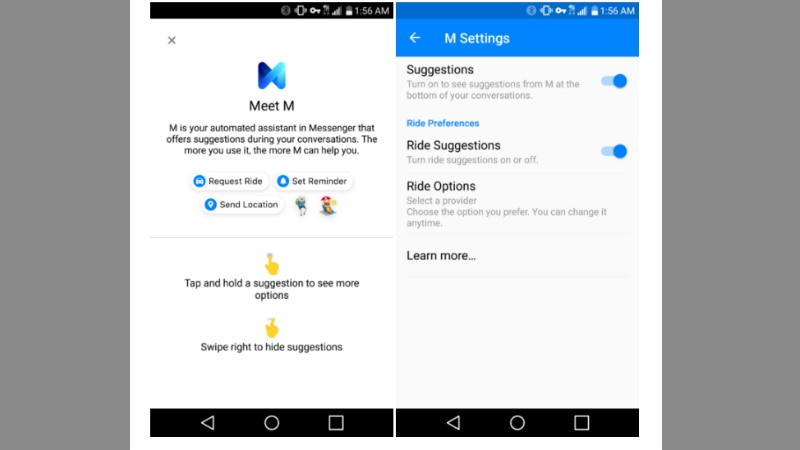 We tried accessing the updated UI in the Facebook Messenger beta version, but did not see it. The testing appears to be limited to select users.

Further reading: Facebook, Facebook Messenger, Facebook M Virtual Assistant, Mobiles, Apps
Tasneem Akolawala Email Tasneem
Tasneem Akolawala is a Senior Reporter for Gadgets 360. Her reporting expertise encompasses smartphones, wearables, apps, social media, and the overall tech industry. She reports out of Mumbai, and also writes about the ups and downs in the Indian telecom sector. Tasneem can be reached on Twitter at @MuteRiot, and leads, tips, and releases can be sent to tasneema@ndtv.com. More
Will Nokia Make a Grand Comeback in India?