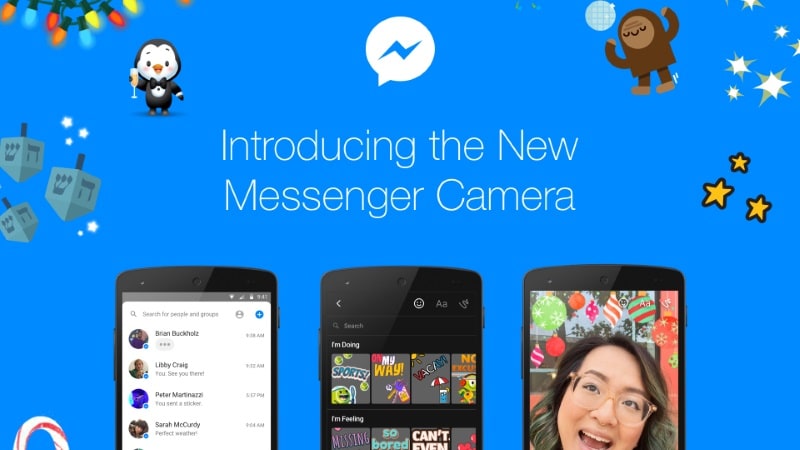 Facebook has been updating its services to keep them on par with other media sharing platforms for quite some time now. The social media giant has already introduced some features to its apps that seem to directly imitate those on Snapchat. Now, its Messenger app has received the same treatment with its latest update - a revamp to the app's camera. The update has begun rolling out for Android and iOS apps, but has not yet reached India yet.

The latest update to Facebook's Messenger app puts the camera button at the centre of the screen and this pretty much sums up the strategy by the company. It doesn't matter if users have just opened up the app or they are in a conversation, they can see the shutter button at the centre of screen. Just like most camera apps, a single tap will take pictures while a longer press will start recording a video.

"In some ways the camera is now replacing the keyboard," the company said in its blog post.

Along with easier access to the camera button, the update brings along 3D masks and special effects to the app that provide users with artistic filters for full screen, just like on Snapchat. The company claims to have added "thousands of stickers, frames, masks and effects" to the Messenger app. Facebook says that it worked with artists around the world to come up with more customisation tools for Messenger.

In order to make text messages more fun, Messenger now provides a palette button beside the camera button that provides users with artwork suggestions on the basis of the text written by them. Other features on Messenger will work as same and, needless to point out, users can still send text messages in the old-school way.

Now, instead of having to choose a message thread first and then taking a picture or video, users can first shoot and then choose the contacts that they want to share their content with.

In August last year, Facebook unveiled its virtual assistant 'M' for Messenger app. Now, the company has started testing 'M suggestions' feature in US, which provides action suggestions inside the app on contextual basis of the conversation, as per a report by BuzzFeed.

Facebook recently introduced a new feature called 'Camera Effects Platform' that lets users add and design a frame for their photos and videos.

It will be interesting to see how the latest updates improve the Messenger app and whether all social apps will become clones of each other going ahead.