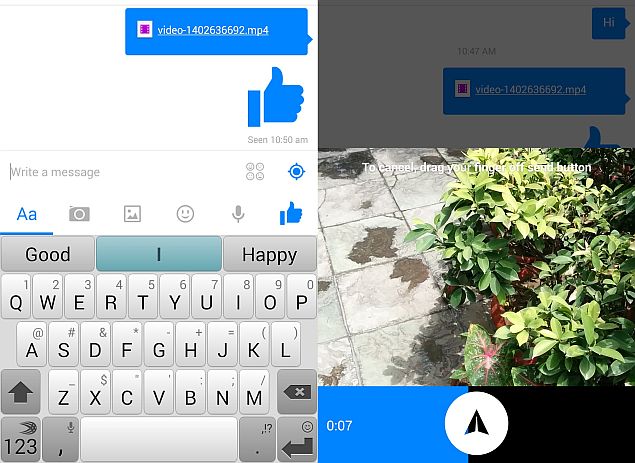 Facebook's Messenger has borrowed another feature of its rival messaging app, Snapchat, as it rolls out its latest update for Android and iOS users that deals with the video sharing feature and the 'Like' button.

The latest update (version 6.0 for iOS), brings a key feature through which Facebook Messenger users can shoot and play 15-second video messages directly from the handset's camera (by tapping and holding the record button) within the app in the form of a video chat. While the front-facing camera is triggered by default, the rear camera can also be used.

The Facebook Messenger update also lets users press and hold the 'Like' button and a send even a bigger thumbs up for the things they really like.

"Instant Video Sending: Shoot and play 15-second video messages from the camera right in the app. Big Likes: Press and hold to send an even bigger thumbs up when you really, really like something," states the Facebook Messenger app listing's What's New section on the App Store.

The updated Facebook Messenger app can be downloaded from Google Play and the App Store.

Also added to Facebook Messenger v5.0 for Android are stickers shortcuts, which guides users to the relevant sticker packs when they receive a new sticker from a friend. A new row of icons is also available, for quick access to functions such as inserting stickers and other media.

The iOS users got the same version 5.0 update for Facebook Messenger in April. The official changelog noted that the Facebook Messenger app (version 5.0) for iOS added video sharing, which now allows users to play the shared videos in the app itself; instant photo sharing, which offers the option to send a clicked image with just one tap in the app; improved search, which will add quick search of people and groups, as well as other fixes including stickers and groups.

Facebook is of course due to take on Snapchat in another way, with the anticipated launch of its own ephemeral messaging app, Slingshot, which was briefly listed on the App Store.

Notably, Facebook's new ephemeral chat app Slingshot, unlike Snapchat and other chat services, forces a user to send an image or 'sling' (as Facebook calls it) it in order to view an image, as seen in the briefly listed screenshots.

Other features in the app include the ability to write captions and make drawings on the images and video messages sent by a user, something already found on Snapchat. The Slingshot app also offers users viewing a message the ability to send a reaction to an image. The app maintaining its ephemeral nature deletes an image once it is swiped away by the user.