The payment options on one of the world's most used instant messaging apps, Facebook Messenger, has now widened. While previously Facebook Messenger only supported payments for products and services via debit card transactions, the messaging service has now added as a payment partner - starting with a small number of users in the US. Users will be able to pay through their PayPal account via a chatbot after they link their PayPal account on Facebook or Messenger.

The payment feature has started to roll out for users to pay for Messenger transactions using their PayPal wallets, starting with the US. "To continue ushering in this new commerce paradigm, today we are announcing an extension of our relationship with Facebook and Messenger, to help make mobile commerce smarter, simpler and more secure for consumers as well as merchants." said Bill Ready, EVP, Chief Operating Officer, PayPal in a company's blog post. 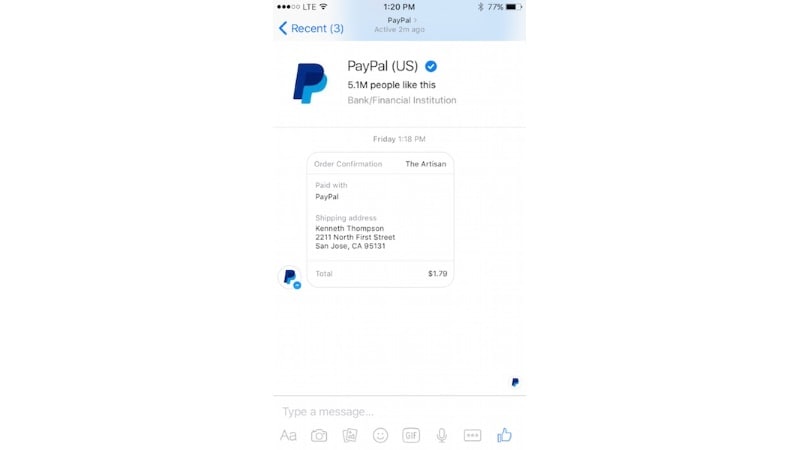 PayPal notifies users on Messenger itself whenever a transaction takes place via the Messenger app. The notifications will also include the receipts and other payment details. Facebook last December partnered with PayPal's subsidiary Braintree and Uber to allow users to hail rides using its messaging app and pay directly via Messenger.

PayPal has already tied up with multiple payment services like Visa, MasterCard, Telcel and Claro, Vodafone and Alibaba. This is also not the first time PayPal has partnered with a messaging service - BlackBerry Messenger got the service across platforms last year (https://gadgets.ndtv.com/apps/news/bbm-app-update-for-android-ios-bb10-brings-paypal-integration-and-more-748838). Facebook's Messenger app will pave more ways for other merchants to exploit its payments. Facebook created chatbots, and now the Messenger app now boasts of more than 30,000 chatbots. The social media giant says that it's also working with Stripe, Visa, MasterCard, and American Express among others to enable users to pay on the app.