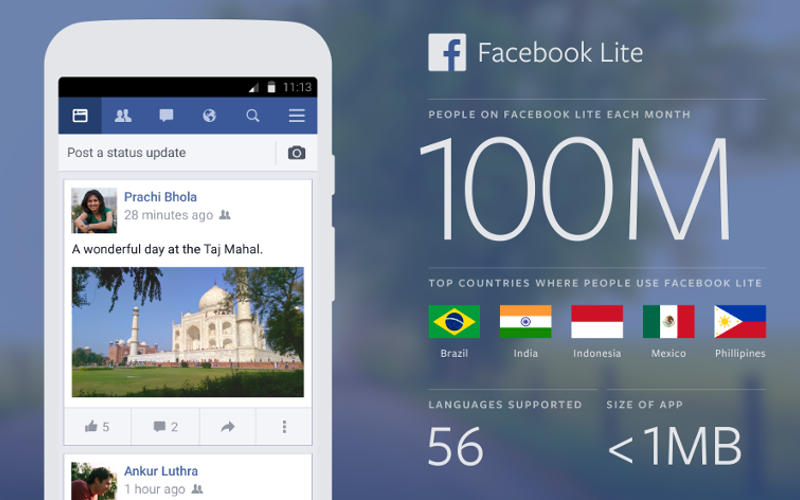 Facebook announced Wednesday that Facebook Lite reached 100 million monthly active users less than nine months since it launched, making it the fastest-growing interface from the company to hit the milestone.

Launched for emerging markets on Android devices in June 2015, Facebook Lite has a download size smaller than 1MB, and is optimised for low-bandwidth conditions. Facebook Lite now supports more than 50 languages, and has been rolled out in more than 150 countries through Latin America, Asia, Africa. and parts of Europe.

In an interaction with Gadgets 360, Vijay Shankar, Head of Product, Emerging Markets, Facebook, said that the app addresses the needs of 1.6 billion people in the world, many of whom do not have access to 3G or 4G networks. Philippines, Indonesia, Mexico, Brazil, and India are the biggest markets where the app has the greatest product market fit, and is most popular in.

"Even for people on 3G networks, the intermittency and stability of the connection are often the biggest barriers to delivering a great mobile experience," he said.

(Also read: Facebook Lite for Android Review: Made for India)

"When we launched back in June, we wanted to just put a minimum viable product, within a few months we knew people loved the app. We've been building on top of the foundation here, anything we add, we wanted to stay true to the core values of the app, which is working on any phone or connection, and having good data usage." Shankar said. "Every single feature, we looked at whether we will have to re-engineer it to make sure that it does these things, if not, we're not adding."

Since its launch, FB Lite has added support for videos, multiple photo uploads, pinch-to-zoom for photos, and emojis, apart from reducing app load times by 25 percent.

"We've enabled a seamless upload functionality, where after you hit post, you can continue to browse on the app and do other things." Shankar said. "We also call out the file size of the video. It sounds like a small thing, but this has really helped. We also make the resolution slightly lower, so it loads faster," he added.

Gautam Roy, Technical Lead on Facebook Lite at Facebook writes that the key objectives of the app were to stay below the 1MB apk size limit, and build an app that works on Gingerbread and on a 2009 year class device, and to design client-server interaction to optimise data usage for 2G networks. "Instead of using HTTPS, Lite uses a custom message protocol over TLS (directly over TCP). Com-pressed message exchange takes place over the persistent TLS connection the client establishes to the server for the duration of the session," he writes.