One of the major app redesigns has been done by Facebook for its iPhone app. The social networking service has completely revamped its iOS app not just for iOS 7 but also for other versions of iOS including iOS 5 and iOS 6.

Facebook has always used a more custom design instead of going with iOS style navigation elements. However, the updated app in a way switches to more iOS-like navigation with a new bar at the bottom of the app, that features buttons for News feed, Friend Requests, messages, notifications, and a More button that offers a menu which was previously included in a sliding pane at the left hand, a feature that some people also call the Hamburger menu.

The bar is white in colour with grey text and icons for passive tabs and blue text and icon for the active one in iOS 7. The same bar is black and follows the old iOS design scheme on iOS 5 and iOS 6. The top header is also translucent on iOS 7.

The More menu features the user profile, Nearby Places to check-in, other Pages that you're moderating, Groups, Events, Friends lists, Photos and other options.

The app header features a Search button and a button for bringing the Chat sliding pane at the right hand.

The News Feed tab also offers three buttons at the top for posting a status message, uploading a Photo and Checking in at a place. 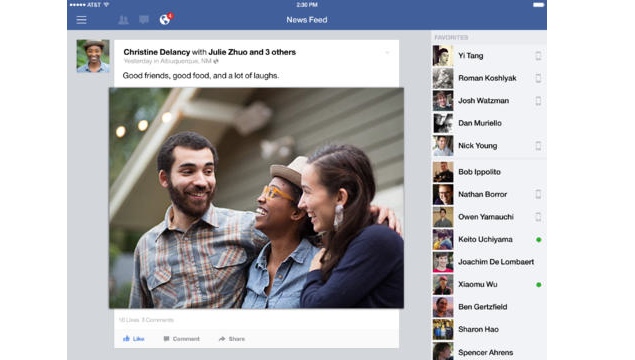 The Facebook app for iOS is a universal app, which means the same app also runs on the iPad. However, the iPad counterpart still retains the original UI elements including the sliding pane at the left hand and three small icons for Friend requests, Messages, and Notifications at the top header. However, the header now sports blue colour.

The new app is now live on the iTunes App Store. However, it could take some time till you see an update option, while it rolls out to all regions.
Comments