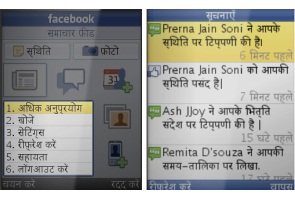 Highlights
Facebook has added Hindi along with Malay and Vietnamese to its java-based Facebook for Every Phone app. Facebook also announced that it will offer seven more local Indian languages - Gujarati, Tamil, Malayalam, Kannada, Punjabi, Bengali and Marathi which will roll out in the coming few weeks.

The app was originally launched in July last year that allows people to view and upload photos to Facebook as well as find friends from their contacts thus enhancing their feature phone experience.

The app promises support for over 2500 devices and work with 2G/2.5G networks. The app can be downloaded from m.facebook.com or typing d.facebook.com/install directly in the mobile browser. Users can also download it from the Nokia store and other independent app stores like GetJar, Appia and Mobile Weaver.
Comments