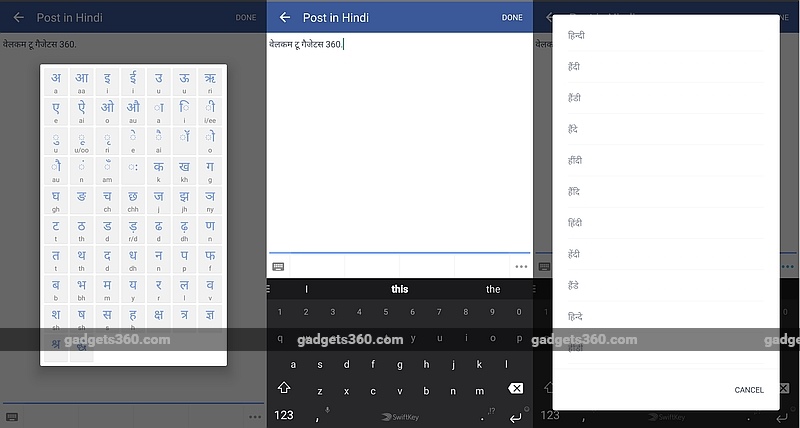 Focusing on emerging markets, Facebook has introduced a nifty new feature in its Android app for Indian users. The new Hindi transliteration feature lets users type in English and have it automatically converted into the Devanagari script before posting.

Facebook for Android v73 now brings a small Hindi editor keyboard icon just above the onscreen keyboard that can be seen while uploading a status or writing a comment. Clicking on the small keyboard icon will let you type any word (whether English, Hindi, or another language) in the English (Roman) script, and convert it into the Devanagari script as you type.

In case users are not happy with the transliteration, they change any of the Devanagari letters by tapping on the keyboard icon on the left-side. Users can also select matching words by tapping on the three-dot more option on the right. The Hindi editor keyboard can be enabled from the App Settings section. "When people use this, we take the characters typed in English and suggests similar Devanagari characters. This new option will also remember the suggestions you use the most. We're just starting to roll this out and working to improve, but if we don't get the Devanagari characters right, there is an option to type them in yourself," says the social media giant.

The company said there were two major reasons for rolling out the new Hindi transliteration feature. The first is that most smartphones do not come with multilingual input feature. The second, is that while users can download third-party Hindi keyboards for their Android smartphones, they would have to switch to the keyboard before typing in Facebook, making it difficult. Of course, the feature is useful for those that aren't comfortable typing in Hindi.

Facebook recently brought the group calling feature to its standalone Messenger app. Using the feature people can make calls in any group conversation by just tapping on the phone icon. It is worth mentioning that the group calls feature is currently limited to just 50 people but we can expect Facebook to increase the limit in the future.