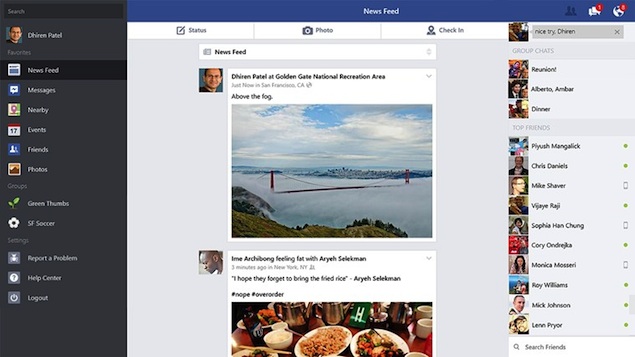 Microsoft has released Windows 8.1, the next big Windows update, which is being offered free of charge to Windows 8 users bringing a number of changes and additions.

While a large number of native Metro/ Modern UI apps are being revamped, Microsoft is also introducing new apps. One of the major names to now join the Windows app platform is popular social networking service, Facebook.

The Facebook app built for Windows 8.1 and Windows RT devices offers most common features of Facebook with a UI design in line with the Metro/ Modern design philosophy introduced with Windows 8 and Windows Phone and, native access (without the need for a web browser) and functionality.

You no longer need to open your web browser and go to the Facebook website to check your friends' status updates and chat with them.

The Facebook for Windows app follows the UI layout of the service's other apps with a grey sidebar at the left hand side featuring tabs for News Feed, Messages, Nearby (check-ins), Events, Friends and Photos in addition to Groups and Settings. The middle column displays the updates with the Status, Photo and Check In buttons at the top for posting a status update, uploading a photo and checking-into a place.  The right hand sidebar features online friends and chats.

The app allows users to get notifications when friends like and comment on their posts, and get status updates on the Windows Start screen. It also allows users to share updates and photos through the share charm action and chat with a single user or have group conversations.

An interesting thing to note is that the app has been developed by Facebook and not by Microsoft. The latter had developed the Windows Phone version of the Facebook app and even runs a beta testing program for its users.

Yes, the iPhone 5s and iPhone 5c are expensive. Why, did you expect otherwise?
Acer Iconia W4 tablet with Windows 8.1 launched