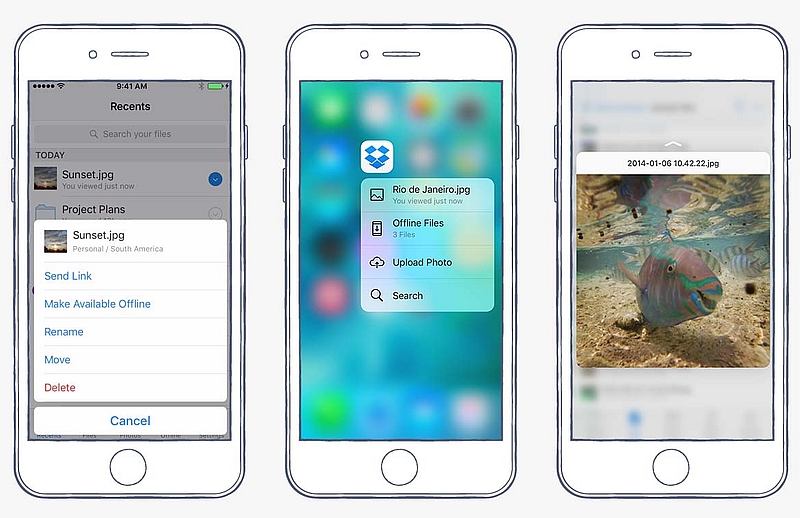 Dropbox has rolled out an updated app for iOS 9, sporting new features supported by the new mobile operating system as well as 3D Touch input for the iPhone 6s and iPhone 6s Plus. The update bumps the app version to 4.0.

The latest Dropbox app update v4.0 now includes a small downward arrow besides every file and folder. Tapping the arrow would give users easy access to share, rename, move, and delete the particular document. The options would be available in an action menu popup. Dropbox has also renamed its 'favourites' section to 'offline files'. Users can mark any file for offline access and work on it without any Internet connection. The marked file would be available from the Offline tab.

For iOS 9 users specifically, Dropbox v4.0 now supports the Spotlight search feature. The Spotlight search results would include recently opened Dropbox files along with files marked for offline access, tapping on which would open the particular file inside the Dropbox app. The company also states that tapping on any Dropbox shared links from any app would open the link inside the Dropbox app only.

The company also announced features for iPhone 6s and iPhone 6s Plus users. The updated app would be making use of the handsets' key feature - 3D Touch. From the home screen, users can now light press the Dropbox app icon to view the quick actions menu. The menu would show users their recently modified files, access to offline files, option to upload a photo, and search. Inside the app, 3D Touch can be used to peek inside a file or a folder. Light press on the file name would give users a preview, or a folder to view its contents. A deeper press would open the file or the folder. The updated Dropbox app can be downloaded from the App Store.

It is worth noting that this update makes Dropbox one of the first major apps to support iOS 9 and iPhone 6s/ iPhone 6s Plus smartphone features. Now that both iOS 9 and the iPhone 6s/ iPhone 6s Plus smartphones have been launched, we can expect more developers to start implementing support for these features in their apps. While iOS 9 features might be easier to support by many applications, the 3D Touch support might take some time to arrive as the developers would then have to make the optimised versions of the apps for the two handsets.

Dropbox last month rolled out a function that lets users save links in its cloud storage quickly and easily. The iOS and Android users can 'Share' the page to save it in their Dropbox account, something similar to what the Pocket app users do. It also added U2F or Universal 2nd Factor security keys that work as an additional method for two-step verification process.