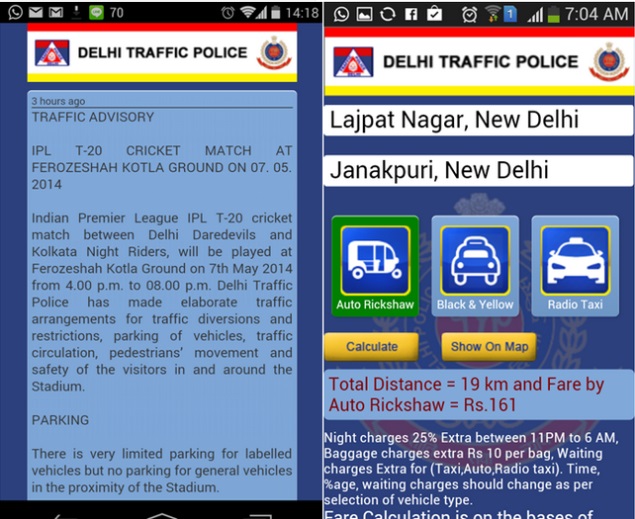 In what may be a first of its kind initiative in the country, Delhi Traffic police on Thursday launched a mobile app through which commuters can get instant traffic updates, calculate taxi and auto fares, report defunct traffic signals and fetch all related information right on their smartphones.

The mobile application and a revamped website of Delhi Traffic Police were launched by Delhi Lieutenant Governor Najeeb Jung at a function at Vigyan Bhavan, New Delhi.

Speaking on this occasion, the Lt. Governor lauded the efforts of Delhi Police and expressed pride in being associated with a force which is led by such competent officers.

He observed that besides ensuring maintenance of law and order in the city, Delhi Police was also in one way or the other associated with other challenges of the city.

Jung also appreciated the initiative taken by Delhi Traffic Police in adopting a proactive approach to solicit greater public participation in traffic related matters and attempting to provide services and information to the benefit of one and all.

The new mobile application is currently available on Android phones and can easily be downloaded from Google Play. It will be soon available on the App Store and Windows Phone Store.

People can assess fare charges to be paid to auto/ taxi / radio cab drivers, calculation of distance travelled and shortest route to be taken for destined journey in Delhi.

Complaints can be lodged against TSR/ taxi drivers for misbehaviour, refusal and overcharging.

Commuters can also access information about the impound lot for vehicles towed away by Traffic Police when parked unauthorisedly or improperly. Direct calls could be made to emergency numbers.

In his welcome address, Delhi Police Commissioner of Police laid stress on the need to make the lives of citizens easy by exploiting the latest advancements in technology and road safety.

He also informed the gathering that Delhi Traffic Police has also upgraded its existing website to include detailed information about various aspects of traffic management which include prosecution statistics, congestion points, areas prone to water-logging.