Delhi Gets a New App for Booking Auto Rickshaws and Cabs 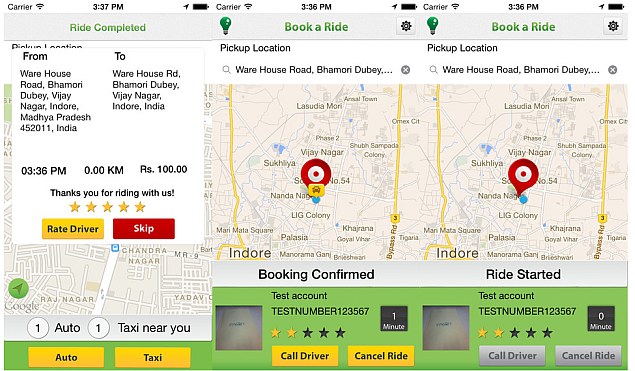 A Delhi-based company has introduced a mobile application that enables users book autos and cabs without the hassles of waiting by the roadside or through the Internet or phone calls.

Developed by NGA Technologies Pvt. Ltd, the AutoNCab app is claimed to be a modern and new concept that caters to both commuters and drivers, and "makes the laborious process of calling an auto or a cab easy with a few simple taps on their smartphone," a company statement said.

"Passengers do not need to wait by the roadside and negotiate fares to hail autos or stay on-hold on the telephone while booking cabs. Once the app is downloaded on their smartphones, a few simple taps will get them the service quickly and easily," said Alok Sawhney, co-founder and chief executive officer, AutoNCab.

Users can download the app for free from the Google Play or the App Store for iPhone.

The company has introduced the facility at Saket and its adjoining areas in south Delhi and plans to roll out the service in other parts of the city soon. The company plans to expand pan-India over the next 12 months.

Earlier this month, another app was launched for Delhi residents to locate GPS-fitted auto rickshaws nearest to them, and then call its driver, whose numbers are registered with DIMTS, on their mobile phone to book a trip.

Called PoochO, the app was developed by the Delhi Integrated Multi-Model Transit System (DIMTS). PoochO app can be downloaded on only Android phones from Google Play and thereafter, people have to ensure GPS of their phone is on and can find out the auto rickshaw nearest to them through Maps.

"After booking auto through this app, commuters can share their travel details on Facebook and Twitter so that their friends and family members can get to know about their locations. Besides, there are several security elements in this app," Jung told reporters.
Comments

Lenovo S850 With Android 4.4 KitKat Launched at Rs. 15,499
India Has Higher Smartphone Usage Than the US: Study