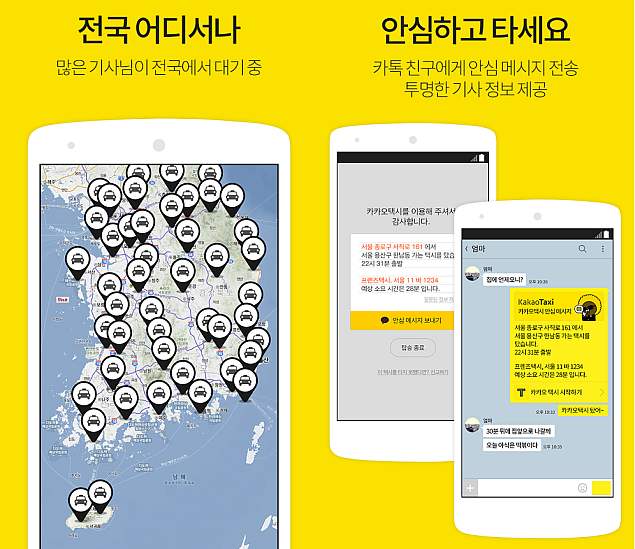 Daum Kakao, which claims some 50 million active monthly users, has taken various steps to avoid the pitfalls encountered by Uber, including using only registered taxi drivers for its service called KakaoTaxi.

Tuesday's launch was for Android users, with an iOS version scheduled for release in April.

Uber started its service in South Korea in 2013 but immediately ran into opposition, with taxi drivers protesting what they saw as a threat to their livelihoods.

Its use of non-registered drivers triggered a series of lawsuits from municipal and state officials.

The municipal government in Seoul, meanwhile, offered a one million won ($920) reward for those who report cars offering rides through the Uber service.

And the national telecoms watchdog ruled that Uber Korea had failed to report its business and receive official permission before providing its location tracking services.

KakaoTaxi has avoided such problems by forging partnerships with taxi associations and a state-financed instant online payment operator.

As a safety measure it allows passengers automatically to receive the name and photo of a driver as well as vehicle information.

KakaoTaxi also has privacy safeguards such as an in-app messaging system that automatically deletes chats after a ride is completed.

The service tracks the flow of commuters in Seoul, which helps it figure out where to deploy cabs. It also allows users to pay for rides with their subway passes.

There are about 280,000 registered taxi drivers in South Korea.