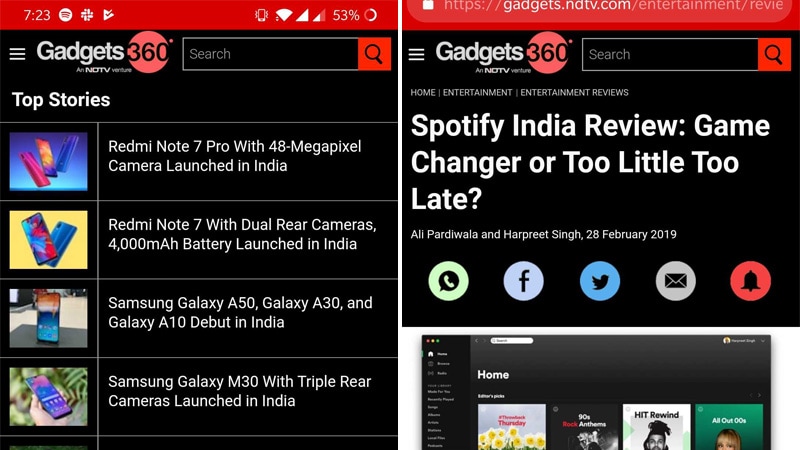 Not all pages may render perfectly in the force dark mode

Google has been working on a system-wide dark mode in Android Q, and that includes the Chrome browser as well. Though we had reported earlier that Google has been testing dark mode on the browser, it now seems that the mode is not just limited to the browser interface, but also the pages it renders. Does it really work? Well, you can try it out for yourself by downloading Chrome Canary from the Google Play store on your Android smartphone.

As originally pointed out by 9to5Google, Chrome Canary (v74.0.3718.3) now has a new feature flag - #enable-android-web-contents-dark-mode - that can activate a force dark mode option for all rendered webpages. this largely seems to affect only light backgrounds and not the menus and other major design elements on webpages.

When we tried this, we noticed that forcing dark mode affected certain design elements like the colours on the Gadgets 360 logo. That said, we found the rendering quite usable in the limited time we spent on the browser.

You can download Chrome Canary and try it out for yourself by heading to chrome://flags to enable this setting. It's obviously still in testing phases (considering it's only on Chrome Canary), and results may vary depending on the site you visit with this setting on. Note of course that the Canary build is unstable, thus it is not recommended to use it as your primary browser.

We had earlier reported that the Google Chrome Canary 70 release for Mac was found to work in line with the system-wide dark mode of macOS Mojave. A Google Chrome engineer had also confirmed that a dark mode feature is coming to the Windows version of the browser as well.

This new release however falls in line with one of Android Q's big new feature, which happens to be a system-wide dark mode. Other manufacturers have seemed to jump the gun though and have implemented the feature themselves, as can be seen in Samsung's One UI and MIUI 10.

Black Shark Sets Up Operations in India, Gaming Smartphones Coming Soon
Netflix India Is Going to Have a Big March: Best Originals and Films to Look Forward to